Women Rise to the Challenge in the Arab Spring - Ms. Magazine
Skip to content 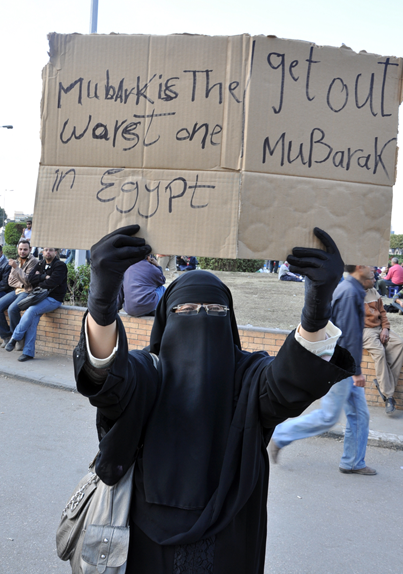 The scene would have had most Americans readjusting their television sets—or their preconceived notions about Arab society. In the April sun, throngs of protesters washed over the streets of the southern Yemeni city Taiz, most clad head-to-toe in black, their eyes steely with determination. The crowd was festooned with bright baseball caps and signs bearing English slogans such as, “We want a new Yemen without Saleh” in seeming defiance both of the autocratic regime and of society’s expectations.

It was only a few months ago that demonstrations exploded across the Maghreb and the Middle East. If you trace the sweep of the revolutionary contagion, a trendline emerges: The seedbed of the revolt, Tunisia, may have lacked democracy but was fairly advanced in providing equal rights for women. The next domino to fall, Egypt, could not have toppled dictator Hosni Mubarak without the support of  women activists who took the helm at Tahrir Square. And now Yemen, a relatively conservative and impoverished country, has seen women gathering in a groundswell of resistance–paralleled by increasingly tense uprisings in Syria and Libya.

The BBC recently reported on one of the figureheads of the Yemeni uprising, Tawakul Karman, a former stay-at-home mother whose political passion was galvanized when her husband became a political prisoner:

In the last three months, Mrs Karman has been imprisoned, beaten and humiliated in the state media. As a result, she is a household name in Yemen and an inspiration to many women here. ‘This goes beyond the wildest dream I have ever dreamt,’ she says. ‘I am so proud of our women.’

With Yemeni President Ali Abdullah Saleh’s regime on the brink of implosion, women’s role in the revolution is coming to the forefront, as Karman and other women become fixtures at the demonstrations in Sana’a‘s Change Square. The outrage flared after Saleh denounced women protesters as violating Islamic law. The attempt at intimidation backfired: One activist told the BBC, “Ali Abdullah Saleh turned me into a stronger woman.”

The outpouring of social and economic frustration has subverted gender hierarchies and stereotypes both in the political establishment and in the opposition. While Yemen’s Western-backed authoritarian regime faces rising public wrath, the opposition Islamist party Islah may actually offer women a greater voice.

According to news reports, Islah activists may not see women’s rights on their main agenda, but they’re keen on engaging women, at least for pragmatic reasons. As anti-government protesters start to envision life after Saleh, each woman will ultimately count as one vote in future elections.

Yet the rising profile of female revolutionaries remains shadowed by the gendered burdens of authoritarian oppression. Terrorized women and children form the bulk of the refugee tide spilling out of Syria over the border to Lebanon in order to escape the crackdown on the roiling uprisings. In Libya, civil war has reportedly spawned an epidemic of rape as a military weapon.

Back in Egypt, the solidarity of the January 25 uprising, which for a moment united people across lines of class, religion and gender, now appears to be ebbing into sectarian and socioeconomic strife. The protests continue, sometimes spilling blood on the streets. Egypt’s struggle for gender justice has followed a similarly precarious trajectory. Although many women activists became icons of the youth-driven revolutionary movement, military rule now threatens to rollback their gains. According to political analyst Valerie M. Hudson, recent stirrings in parliament could effectively squelch women’s participation in government:

Reacting to these reports, women’s organizations in Egypt have called for the quota to either be maintained, or for a 3-3-4 party list system to be instituted. In that system, a woman candidate must figure among the first three listed candidates, among the second three listed candidates and then among the next four listed candidates. As Noha El Khoury of the [Egyptian Center for Women’s Rights] has written with great concern, the status of Egyptian women ‘is not getting better’ after the revolution.

The complex symbolism of women in protest movements is nothing new, not even in the Middle East, as seen in the martyrdom of “Neda” in the Iranian uprising of 2009. But today, some activists in the region fear women risk being co-opted by reactionary agendas. The Egyptian Center for Women’s Rights sharply criticized a recent clash between Muslims and Christians at a march that had been billed as a rally against sectarian strife. In a statement [PDF] issued earlier this month, the group said, “The incidents that happened between Muslims and Christians are a clear attempt to abort the 25th of January revolution through the use of women to fuel strife.”

After the overthrow of Mubarak, as Ms. reported earlier, women demanded social and cultural revolution in addition to political change. The reaction was telling: Many felt anxious or threatened by feminist rebellion in the still-fragile democracy. Cairo-based activist Jumanah Younis recalled attacks on women at a Tahrir Square demonstration in March:

As I struggled to stay upright, a hand grabbed my behind and others pulled at my clothes. When, a few minutes later, I found the other women I was with, one told me that a man had put his hand down her top, while another woman had been pushed to the ground and held down by a man on top of her. The police continued to direct traffic around the square as the incident was taking place.

Such outrageous displays of contempt for women cannot be allowed to persist in the new Egypt. Time and time again so-called “women’s issues” have been relegated to the bottom of the agenda: We must end corruption first, we must have political freedom first, etc., etc. On Tuesday, Egyptian women said: ‘Now is the time.’ There is no freedom for men without freedom and equality for women.

The Arab Spring has raised a beacon of democratic change and shattered walls of fear in a region long dominated by tyrants or foreign powers. But the scope of the struggle also complicates the dialogue about gender, social justice and democracy in the communities that are being rapidly reborn. In a climate of militant protest, however principled, warped notions of nationalism and masculine valor tend to surface, and can easily dissolve into violence and chauvinism.

The history is still being written. Back in Tunisia, subtle gender dimensions continue to unfold from the scene that spawned the Arab Spring, the self-immolation of a young street vendor. The common narrative suggested Mohamed Bouazizi had been slapped and humiliated by a female police officer, Fadia Hamdi. But this framing of the events—the indignity suffered by the emasculated jobless youth versus the arrogant aggression of the police woman—has come undone. The legal case was dropped and Hamdi’s name effectively cleared in the media. In the end, the woman held responsible for sparking nationwide revolt was greeted with cheers outside the courtroom hailing her freedom, according to press reports. No longer pressing the case, Bouazizi’s mother reportedly declared, “For me, it is enough that Mohamed’s martyrdom has resulted in freedom and the fall of tyrants.” So it goes with the mercurial politics of revolution.

Women’s voices have carried far and wide on the Arab Spring’s winds of revolution, fading in and out as in the tumult still churning throughout the region. But no matter where women march from here, there’s a recognition that no matter what, there’s no going back to the way things were.