A Cheerleader's Rape in a Small Texas Town - Ms. Magazine
Skip to content 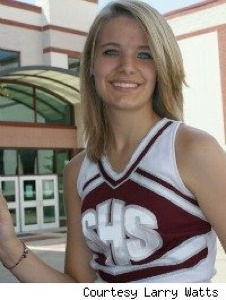 Caroline Heldman has been covering the rape of teenaged Hillaire S.–a cheerleader in Silsbee, Tx.–for the Ms. Blog since October (see here and here). Her latest report reveals shocking new details of the attack and of the response to the case by the town, the high school and the courts. This is part one of a two-part series.

Maybe it’s the cheer that makes this one rape among hundreds of thousands that occur in the U.S. each year so resonant.

As Rakheem Bolton came to the free throw line during a February 2009 basketball game, the Silsbee High cheerleading squad had a rhyme at the ready: two, four, six, eight, ten, come on Rakheem, put it in.

Four months earlier, cheerleader Hillaire S. had alleged that Bolton had raped her at a house party. And now she was being asked to gleefully urge him to “put it in.” She quietly folded her arms, stepped back from the rest of the squad, and refused.

A few weeks later, she once again found herself asked to cheer when Bolton approached the free-throw line. This time, she knelt down next to her cheerleading coach and remained silent. The coach took her into the gym’s foyer to face the school superintendent and the Silsbee principal. Hillaire says they told her she needed to cheer for everyone. Sobbing, she stood her ground. She was formally removed from the squad the next school day.

The house party took place on an October night in 2008.

Hillaire was exceedingly intoxicated after drinking a beer and multiple shots of vodka. She made out with a guy in the living room and was egged on to kiss a female friend by a group of ogling guys. Rakheem Bolton, then playing for the football team at the school, and his friends arrived late to the party and, seeing an intoxicated and flirtatious Hillaire, isolated her in the house’s pool room. Here’s what she later told the police happened next:

I was suddenly pushed into the pool room and the door was closed behind me and the lights turned off. … I was pulled backwards and someone whispered in my ear ‘just lay down on the floor …’  Hands on my thighs were pushing my legs apart. I felt someone penetrating vaginally. I suddenly realized what was happening and I put my hands on someone and yelled at them to stop. I then said, ‘Seriously, stop it.’’ I then said ‘no!’  I heard someone–I think it was Derek–say something like, ‘Dude she said ‘stop it’ and ‘no.’ [Editor’s note: “Derek” was a minor at the time, so his name has been changed]

Even if Hillaire had not said no, a crime may have been committed anyway. For one thing, the Texas penal code deems it sexual assault when one person uses force and the other is physically unable to resist. In addition, Hillaire may have been too intoxicated to be considered legally able to consent.

This really isn’t a he said/she said story. Two students outside the pool room–Patrick Steed and Richard Garrett –heard Hillaire say “Stop!” Unable to open the locked door, they retrieved Jacob Riley from another room. Riley again heard Hillaire say “stop,” so they broke through the door, only to find that three of the four athletes had fled through the window, breaking it in the process. The one young man who stayed behind told police, “I know I did not do anything so I didn’t run.”

Derek, one of the football players who fled, confirmed Hillaire’s account of the incident. He said that his teammate Christian Rountree “was holding her and was trying to talk her into coming in [to the pool room], so when they went back in I just followed.” At one point, he says, Bolton told the others to leave the room for five minutes. “We act [sic] like we left but we just hid under the pool table.” Then “Rakheem layed [sic] her on the floor and started to have sex and she start [sic] saying ‘stop.’ So Rakheem stopped.”

When the rescuers burst in, they found Hillaire lying partially under the pool table, half-clothed and crying. Said Patrick Steed, “All she had on was her black bra. She rolled over and reached for her clothes that were under the pool table. She was crying and appeared upset.” Garrett added to police, “I believed Hillaire had been raped.”

Stacy Riley, who owned the party house, was watching a movie in her room when the assault took place, and would later be charged with serving alcohol to minors. She heard the commotion and found Hillaire in the pool room. Said Ms. Riley,

[I asked] her again if she was hurt and ask[ed] her if she had been raped. All she would say was ‘yes’ and continued crying. … I began to cry again and said to her, ‘Sweetie, if you were my daughter I would want to know.’

Meanwhile, Garrett and Jacob Riley actually tried to chase down the perpetators, Garrett grabbing a bat and Riley a martial-arts sword. Bolton, who fled without his clothes into the woods, had borrowed a jacket and shorts from his friends and was heading back to demand his own clothes. Jacob confronted Bolton and accused him of rape. According to Stacy Riley, Bolton yelled back,

I didn’t rape no white girl. I wouldn’t use anyone else’s dick to fuck her. I didn’t put my dick up inside her. I don’t know if she has AIDS. I don’t even know that girl.

But Bolton would later nod assent when police asked if his DNA could be found on a condom left at the scene.

Bolton’s parting words to partygoers were: “I didn’t rape anyone, and you better be locked and loaded! I’m going to spray this house !” According to Ms. Riley, “He told my son and I … that we had better not go to sleep, that he was coming back to kill everyone.”

Hillaire didn’t sleep: She spent the early morning hours after the rape at the police station and at a nearby clinic. She had sustained internal injuries and her right thigh showed a full handprint bruise–“a thumb and four fingers,” according to her mother, Christena. Of the four young men in the room, Bolton, 17, and Rountree, 18, both legal adults in Texas, would be arrested and charged with “child sexual assault,” which carries a prison term of two to 20 years. Derek, a minor, was arrested on unknown charges.

How does a young woman go on with life after such a traumatic experience? And how does a community respond to a survivor of such an attack? In this case, the simplest answers are “bravely” to the first question, and “with cowardice” to the second.

Hillaire returned to school a few days after the rape only to face a chilly environment from most of her peers. She says school officials urged her to take a low profile; the cheerleading squad wanted her to skip homecoming because, according to a fellow cheerleader, “Someone from another city had called and threatened her. If she cheered at another game, they were going to shoot her.”

Hillaire went anyway, only to see that some students had painted Bolton’s and Rountree’s jersey numbers on their faces to protest their removal from the football team after their arrests. Students also chanted “Free ‘Tree’” (referring to Rountree) at the homecoming bonfire the next week, within earshot of Hillaire.

Rather than rally around the rape survivor, many fellow students and others in Silsbee blamed Hillaire for what happened that night. Said Sarah [not her real name], a fellow cheerleader,

Right after it happened, most of the school was supportive. But as time went on and we heard more details of what happened, that’s when people started doubting that this happened. … A majority of the school felt this way.

When asked what changed her mind, Sarah described Hillaire’s sexual behavior at the party as proof enough.  She explained to me that Hillaire didn’t act like a “real” rape victim:

Hillaire was called “slut” several times to her face at school. A toddler approached Hillaire at a town parade and–at the probable urging of her parents–called her a “bitch.” An anonymous letter to Hillaire’s family read:

These boys are nice respectable boys and you can’t tell me that there were no other girls that wanted to be with them so they raped your daughter (please). Just think how you have ruined these children [sic] lives and your daughter gets to carry on and be a cheerleader after drinking herself and going against your family values. … This makes your daughter [sic] reputation look very bad and if you think people will forget, remember we live in Silsbee. Someone will always remember! (Don’t think she won’t be talked about.)

Then, in February, four months after the rape, Hillaire was kicked off the cheerleading squad for refusing to cheer for Rakheem.

Hillaire’s popular status as a cheerleader obviously couldn’t compete with the second religion of the town: high school sports. The high school stadium seats 7,000—equal to the town’s population—and it’s always full on game day. With sports having such status, the best male players gain special privilege. Many people in town rallied behind Bolton and Rountree, and the latter’s mother, in an interview with The Silsbee Bee, thanked them:

We’ve had a tremendous, just tremendous outpouring of support and we just appreciate everyone and just thank you for believing in these boys.

Believing in the “boys” meant dismissing both Hillaire and eyewitness reports. Instead, as one student articulated, the overriding belief was that Bolton wouldn’t rape anyone because “he was popular. A lot of girls wanted to be with him.”

Hillaire was deeply hurt by the reaction, but maintained a brave front. Her father Craig told me:

My daughter would wake up in the middle of the night crying and come sleep in our bed at 16, 17 [years old] because she was having nightmares. She’d get up in the morning without any sleep. She’d say, ‘I can’t let them know that I’m not going to school today.’ I look at my kid and say ‘Wow, she’s my 16-year-old kid, and she’s my hero.’ She’s so strong and determined, beat down but fighting back. She could have given up and quit fighting, but she didn’t do that.

Read about the verdict, the town’s reaction and how Hillaire is doing in part two.