The New York Times has a fascinating 3-minute video on “roster management.” a term referring to the manipulation of Title IX rules in order to appear like you’re following them when you’re not.

As the article explains, schools demonstrate compliance with Title IX;

…by showing that the number of female athletes is in proportion to overall female enrollment, by demonstrating a history of expanding opportunities for women, or by proving that they are meeting the athletic interests and abilities of their female students.

Once implemented, women responded enthusiastically to the new opportunities. But spectators and donors are less interested in women’s sports, it turns out. And so colleges have found various ways to resist Title IX rules, including simple noncompliance.

In this case, the strategy is to put men on women’s teams and then report them as female athletes.

Case in point: This is Cornell’s women’s fencing team (from the roster management video)

The men don’t actually compete, they are simply “practice players” (helping the women improve due to their greater speed and strength, says the coach).

The basketball team has a similar strategy. A number of males practice with the team, and then are reported to the authorities as female players.

Revealing that this is an attempt to manipulate Title IX rules and not a simple weird way of accounting for athletes, the five female coxswains on the men’s rowing team are reported not as male but as female. 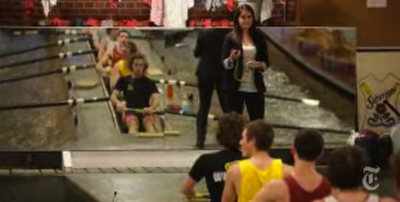 So there you have it. Despite Title IX, these schools are finding ways to continue to spend a disproportionate amount of money on male athletes. According to the Department of Education, this is well within the law.

Other sneaky moves documented in the article:

Quinnipiac University in Connecticut had violated Title IX by engaging in several questionable practices, including requiring that women cross-country runners join the indoor and outdoor track teams so they could be counted three times. The judge found earlier that Quinnipiac had been padding women’s rosters by counting players, then cutting them a few weeks later.

At the University of South Florida, more than half of the 71 women on the cross-country roster failed to run a race in 2009. Asked about it, a few laughed and said they did not know they were on the team.

Sarah Till, who graduated from South Florida in 2009, was a more extreme case. She said that she quit and returned her track scholarship in her sophomore year, but her name was listed on the rosters of all three squads through her junior year.

Last year, an investigation by the Office for Civil Rights concluded that Irvine was not complying with Title IX because its indoor track team was essentially a ruse. It competed in just one meet per year and several women on the roster “vigorously stated” that they were not on the team.

Reprinted with permission from Sociological Image; all rights reserved.