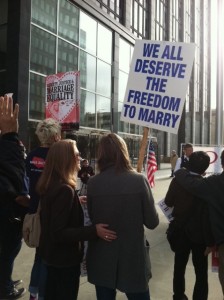 The proponents of Proposition 8, the California ballot measure that stripped same-sex couples of their right to marry, aren’t above fighting dirty. In their campaign materials, they whipped up fear about protecting children and defending families, irresponsibly painting lesbians and gays as molesters and degenerates. When they had their day in court and an opportunity to defend their assertions about the evils of same-sex marriage, though, they tried to distance themselves from the campaign’s ugly tricks. But once the smoke and mirrors had been cleared away by Judge Vaughn Walker’s historic decision, the bigotry behind their scare tactics was exposed (see my Ms. blog piece from last year).

This week, Prop 8 supporters were back in court, trying out a strategy that–if successful–would have radically disrupted the judicial process, requiring judges to present elaborate, even intimate personal histories in order to fully disclose any possible connection, however tenuous, they might have to the case at hand. The pro-Prop 8 lawyers claimed that Judge Walker should have announced at the outset of the trial that he was gay and in a committed relationship, and that because he did not do so his ruling on the unconstitutionality of Prop 8 should be thrown out. Here’s how they framed the issue in their motion:

[I]f at any time while this case was pending before him, Chief Judge Walker and his partner determined that they desired, or might desire, to marry, Chief Judge Walker plainly had an ‘interest that could be substantially affected by the outcome of the proceeding.’

So what they were saying is that a judge who sits on a trial involving marriage rights needs to share his or her sexual orientation, the details of his or her private life and provide information on whether he or she might ever have a desire to marry.

In yesterday’s hearing, Judge James Ware closely questioned Charles Cooper, the attorney for the Prop 8 side, about Judge Walker’s alleged bias. In response to Cooper’s allegation that Judge Walker obviously had a hidden desire to marry because he was in a long-term relationship, Judge Ware asked, quite reasonably, if all people in long-term relationships want to get married. Cooper made a murky distinction between “platonic friendships” and what he called “a relationship such as the one that Judge Walker disclosed publicly”–presumably meaning a committed gay partnership of the non-platonic variety (you can read the hearing transcript here [pdf]). Cooper didn’t say whether a judge would have to talk about his sex life, but the implication was there.

In Judge Ware’s ruling (pdf), he resoundingly smacks down the motion and calls out its basic assumption as being inherently biased against gay people:

Ware ruled that it would have actually been a bad thing if Judge Walker had revealed his private life before hearing the case:

In fact, the Court observes that Judge Walker, like all judges, had a duty to preserve the integrity of the judiciary. Among other things, this means that if, in an overabundance of caution, he were to have disclosed intimate, but irrelevant, details about his personal life that were not reasonably related to the question of disqualification, he could have set a pernicious precedent. Such a precedent would be detrimental to the integrity of the judiciary, because it would promote, incorrectly, disclosure by judges of highly personal information (e.g., information about a judge’s history of being sexually abused as a child), however irrelevant or time-consuming.

Most heartening are Judge Ware’s emphatic assertions about the workings of the U.S. Constitution:

In our society, a variety of citizens of different backgrounds coexist because we have constitutionally bound ourselves to protect the fundamental rights of one another from being violated by unlawful treatment. Thus, we all have an equal stake in a case that challenges the constitutionality of a restriction on a fundamental right. …

In other words, lesbian and gay rights are civil rights, and all citizens stand to gain from living in a just society. Eliminating Proposition 8, the unjust and unconstitutional ban on same-sex marriage, will benefit all who believe in the principles of a free and democratic society.

Today’s ruling upholds Judge Walker’s landmark decision, but unfortunately that decision is on hold pending appeal. Every day that Prop 8 continues to be enforced, California’s lesbian and gay citizens are deprived of their fundamental right to marry. But with the constitution on the side of equal protection and due process for all, and with impartial judges standing up to bigotry, we can hope for a different, and better, future.

Photo from Prop 8 rally before this week’s court hearing by Ana Beatriz Cholo, communications manager for the Courage Campaign. 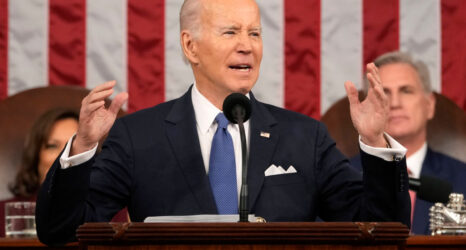