Would Your Rape Be Counted? - Ms. Magazine
Skip to content 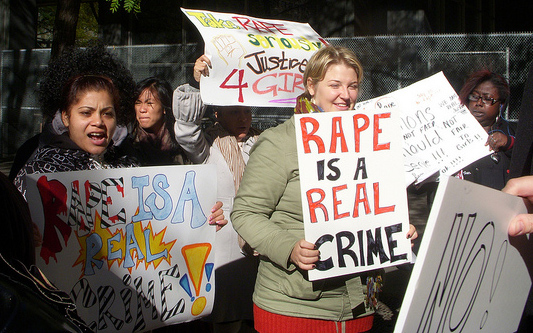 Ms. exposed the extensive implications of the FBI’s “forcible rape” definition in the spring issue cover story, and we’ve been asking our readers to sign a letter to Attorney General Eric Holder and FBI Director Robert Mueller for the past several weeks, urging them to update and expand their impossibly narrow definition of rape. Thousands of people have joined the call. Now, we’re turning up the volume in the hopes of reaching even more people and expanding our impact. As part of that effort, we’re working with Change.org. If you haven’t signed yet, sign now:

And now, we’re making it personal. Under the current definition, the FBI has undercounted rape by hundreds of thousands of cases. Those rapes are real crimes. We’re asking you to share stories from your personal experience, or those of friends or family, of a rape that might not have been counted. Here’s the first:

When I was 15 years old my friends and I met some older boys at the local county fair. Being young and naive as we were, we all went to a party at one of their houses, with my one of my friend’s older brothers as a chaperone. Someone spiked my drink, and I didn’t feel well. I went into one of the bedrooms to lie down and try to feel better.

I woke up some time later, in only my bra, and one of the older boys we met was on top of me, naked, with his fingers inside of me. I screamed for him to stop and he covered my mouth, and let me know he was “loosening me up” as he’d already tried to penetrate, and because I was a virgin he could not. My scream alerted my friend’s brother, who rushed into the bedroom and pulled him off of me.

I was penetrated with fingers without my consent. I never consented to the removal of my clothing, or any sexual act with this person. I was raped. This experience changed my life. As a result, I am timid and nervous sexually, and I panic if my husband’s hands get too close to my vagina. Orgasm is next to impossible, as I can’t fully relax during sex.

Sadly, this story isn’t unique. Rapes like this one happen every day to women and girls all over the country. However, because the FBI continues to use the extremely narrow, 82-year-old definition of “forcible rape,” it never counts rapes like this one in the annual UCR. This results in the underestimation of the scope of the problem and inadequate funding for law enforcement to solve and prevent these crimes.

If you don’t have a story that you’d like to share, you can still make a difference. Sign the petition to add your name to the thousands who’ve already pressured the Justice Department and the FBI to expand and modernize the definition of rape.