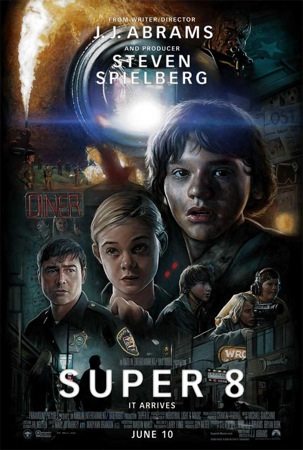 “Did you notice that everyone in that film was, like, a ‘super pussy’?”

Thus joked my 14-year-old son on our drive home from the theater after seeing Super 8. If he notices the problematic use of the word throughout the new film—about a group of young boys filming a zombie movie whose super 8 camera happens to record a colossal train crash—surely filmmakers Stephen Spielberg and J.J. Abrams might also?

This is not to say I didn’t enjoy the film. I did. Great monster movie. Great special effects. Strong characters.

And admittedly, the word “pussy” is used in the film in a knowing way to nod towards the past, as in, “Now we know better than to use that word.” In one scene, for example, Joe’s (Joel Courtney) best friend Charlie (Riley Griffiths) uses the word and then realizes Alice (Elle Fanning) is in the room, looks sheepishly at her, and apologizes as if he has just come to the realization that the word is an insult to her as a woman (which indeed it is).

But using the sexism of the past to try and position the present as somehow better doesn’t really fly in a film that has only one lead female character, Alice. True, this can sadly be said of most big movies. To its credit, at least Super 8 framed the death of Joe’s mother as catastrophic and depicted Alice as wise, brave, independent–and an excellent get-away driver to boot.

Super 8 managed to nod towards race relations as well, via the mysterious Dr. Woodward (Glynn Turman) and his statement that, “I will do everything in my power to set him [the creature released in the train crash] free.” But I don’t know why everyone in the movie assumes this highly intelligent and technological creature is a “he.” (Oh yeah, because “he” is intelligent and technological.)

At least Super 8 gives us one great heroine via Alice. But the smattering of the use of the term “pussy” to indicate cowardly behavior throughout the film still rankles. I mean, come on, Mr. Abrams, women are important creatures, too.