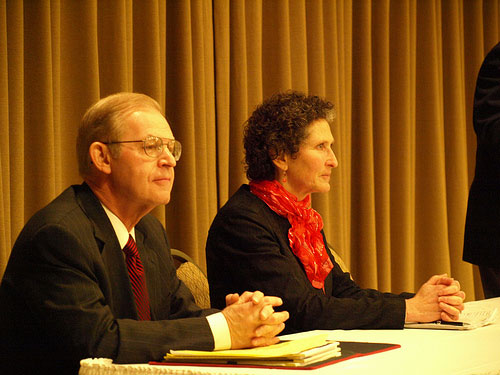 Political tensions have reached a point of violence in the Wisconsin Supreme Court. Or, rather, for one Supreme Court Justice in particular, David Prosser, who allegedly physically assaulted fellow Justice Ann Walsh Bradley during a meeting on June 13. Said Justice Bradley,

The facts are that I was demanding that he get out of my office and he put his hands around my neck in anger in a chokehold.

Prosser has served on the Wisconsin Supreme Court for 12 years, generally upholding a conservative view of the law. According [PDF] to the National Education Association, Prosser has ruled against privacy rights for workers and dissented on majority rulings that protected union workers.

In April, he had to run for reelection to the post, and the contest between him and JoAnne Kloppenburg was seen as a referendum about Gov. Scott Walker’s anti-union bill that would severely cut employee bargaining rights (causing protesters to storm the streets and the Capitol in February). The campaign–in which Republicans tended to back Prosser, Democrats Kloppenburg, was fraught with mud-slinging on both sides, including comments by Kloppenburg supporters about Prosser’s anger problems.

Justice Bradley had previously complained about Prosser’s behavior towards women, particularly back in February when, in a closed-door meeting, he called Wisconsin Chief Justice Shirley Abrahamson a “bitch” and threatened to “destroy” her. He then issued a non-apology, saying “I think it was entirely warranted. … They (Justices Abrahamson and Bradley) are masters at deliberately goading people into perhaps incautious statements.”

The Wisconsin Dane County Sheriff’s Office and the Wisconsin Judicial Commission are investigating the matter of Prosser’s alleged assault on Bradley. If convicted of threatening or assaulting a judge, he could face up to six years in prison and more than $10,000 in fines. Four of the seven Wisconsin Supreme Court justices are women, and as the presence of women in the U.S. judicial system increases so does the importance of calling out harassment and abuse. It’s particularly disturbing that such an alleged incident might have occurred in just the place where laws are made to protect women from violence.

Photo of Prosser with opponent JoAnne Kloppenburg during the 2011 Wisconsin Supreme Court Elections from Flickr user WisPolitics under Creative Commons 2.0