Take Off the Cap: How to Protect Women Under Social Security - Ms. Magazine
Skip to content 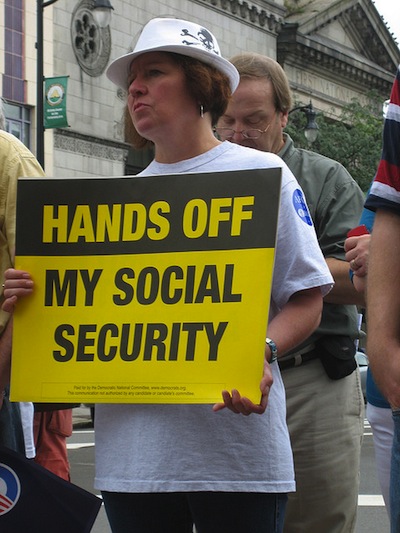 When former senator Alan Simpson, Republican co-chair of President Obama’s National Commission on Fiscal Responsibility and Reform, called Social Security “a milk cow with 310 million tits” last summer, it was not only a misogynistic insult but a symbolic shot at the benefit program older women depend on most.

Even so, Social Security is by no means a plush retirement plan. In 2009, the average yearly payout was just $12,132 for women. Men’s average annual benefit was $15,744, reflecting their earnings advantage during their working years and the underlying sex discrimination of the Social Security program.

Simpson’s attack was a warm-up for the fiscal commission report released in December, which recommended a rise in the retirement age, an effective cut to Social Security benefits, as a way to help pare the nation’s growing debt. Ironically, while the annual budget deficit has many causes, Social Security is not one of them and has been running at a surplus for decades, receiving more funds than it’s been paying out. The problem is that Social Security monies have been loaned to the rest of the federal government via Treasury bonds and not saved in the Social Security trust fund (so the trust fund is filled with federal IOUs).

Despite this, the program is still solvent and will remain so for at least the next 25 years. Not until 2037 will funds be insufficient to pay scheduled benefits, and even then there will be money to pay 76 percent of benefits—meaning the program is far from “broke,” as many claim.

Attacks on Social Security are hardly new. George W. Bush tried it with his privatization plan, and the effort went down to spectacular defeat. For good reason: Privatization means diverting part or all of the money we now pay into Social Security into private stock accounts, on the theory that the market can generate higher returns and people will have a richer retirement. No one talks about what happens if individual investments go sour or the market suffers a general crash, as it did in 2008.

More importantly for women, there is no plan under privatization for preserving spousal and dependent’s benefits, now claimed mostly by divorced women, widows and children under 16 whose breadwinning parent has died. Conceivably, a husband could leave a private account to a girlfriend, or women could be forced to fight over benefits in a divorce. (Under Social Security, spousal benefits are now guaranteed after 10 years of marriage, regardless of marital status at retirement age.)

Though privatization is not presently on the table, schemes such as raising the retirement age have moved front and center. Under current law, people can start drawing reduced, early retirement benefits from Social Security at age 62, with full benefits available at 66—a threshold gradually increasing to 67 for people who were born in 1960 or later. The fiscal commission recommended in its December report that the U.S. gradually (from 2027 to 2075) push up full benefits to age 69 and early benefits to age 64. Women and labor advocates protested the age increase, so the final plan included a “hardship exemption” or waiver for those who can’t physically work past 62 but don’t qualify for disability.

“Phasing in the increase a year at a time delays but does not reduce the full pain,” says Heidi Hartmann, president of the Institute for Women’s Policy Research in Washington, D.C. “We should be increasing benefits for vulnerable older Americans not reducing them. And raising the early retirement age from 62 to 64, even with some kind of exemption, raises the specter of a bureaucratic logjam as each exemption would have to be individually adjudicated.”

The report—fancifully titled “The Moment of Truth”—proposed that Social Security benefits be boosted when people reach 85. Says Hartmann, “It’s not a bad idea, but I don’t want to say it’s good because the bad things they want in exchange are not worth it.”

The Fiscal Commission report received 11 votes of approval out of 18 commissioners—3 short of the 14 needed to formally adopt it. Because it received a majority of “yes” votes, however—including those of three Democrats—many speculate that it will be taken up by the next Congress and will largely frame the debate on deficit reduction.

But despite the Republican victories last November, the election was far from a mandate to cut Social Security. In fact, it was the opposite. According to a poll released by Lake Research Partners two weeks after the election, 83 percent of voters think Social Security cuts are a bad idea for solving the deficit. And there is striking uniformity of opinion across the political spectrum: Eighty-three percent of Democrats, 82 percent of Republicans, 78 percent of independents and 74 percent of Tea Party supporters rejected tampering with benefit formulas, and a majority of each opposed raising the retirement age.

Most—including roughly 6 in 10 Republicans and Tea Party supporters—said what they would support is raising the payroll tax cap on incomes above the current cap of $106,000 (beyond which Social Security taxes are no longer taken from paychecks). That would remove the inequity of, say, a secretary having to pay Social Security taxes on her or his full salary while a much-higher-earning boss gets the break of only paying out a percentage of salary toward the program.

Raising or removing the cap is indeed the simplest and fairest way to eliminate the future Social Security shortfall. A coalition of national women’s groups recommended this fix as a partial solution in formal recommendations back in 1999, and women leaders had been suggesting that action decades earlier as well. According to a report from the Senate Special Committee on Aging released last spring, doing away with the cap would completely wipe out the future solvency gap. By contrast, raising the retirement age, regardless of the formula used, would solve less than a third of the problem.

Lest you think Social Security is just an issue for older women, think again. If the program is significantly weakened, younger family members will have to take up the slack when elders can no longer work. The burden on caregivers—overwhelmingly female—would also be greatly increased.

Rep. Jan Schakowsky (D-Ill.), the most vocal critic of “The Moment of Truth” report, explained her “no” vote this way: “I believe that we can [reduce the debt] without further eroding the middle class in America.” Citing the report’s talk of painful decisions, she asked, “Painful for whom?” Schakowsky has introduced her own plan to cut the deficit without reducing either Social Security benefits or Medicare.

Even if the “Truth” report goes nowhere, remain wary. Assaults on Social Security are a perennial favorite of Republicans, and like Freddy Krueger in A Nightmare on Elm Street, this nightmare for women is sure to be b-a-a-ck.

Excerpted from the Winter 2011 issue of Ms. To have the next issue delivered straight to your door, join the Ms. community.

Comments on this piece? We want to hear them! Write letterstotheeditor@msmagazine.com. To have your letter considered for publication, please include your city and state.