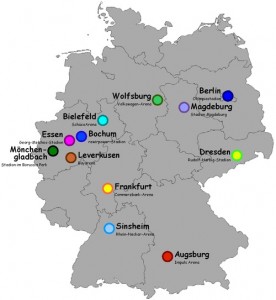 As we in the U.S. celebrate our women’s national soccer team’s advancement to the semifinals at the World Cup tomorrow in Germany, the international gay rights pressure group AllOut.org reminds us to keep speaking out against homophobia in the sport. Specifically, it’s time to step up the pressure against Nigerian women’s coach Eucharia Uche, who, as we reported on the Ms. Blog, has kicked women off the team for their perceived lesbian orientation.

AllOut is asking FIFA, the international soccer governing body, to “publicly condemn this systematic discrimination, investigate the harassment, and take the necessary steps to end homophobia in the league.” The group wants FIFA to suspend any FIFA coaches who violate their players’ civil rights. Said [PDF] Andre Banks, co-founder of AllOut.org,

It is time for FIFA to finally cry foul and give Coach Uche the red card, sending a strong message that discrimination against lesbian and gay players will not be tolerated on or off the field.

To make the point even more visibly, tomorrow at 7 p.m. (Frankfurt time), a 100-person-strong flashmob dressed as soccer referees and carrying red cards reading “homophobia no”  will appear at the S-Bahn station in front of the Commerzbank Arena in Frankfurt. That’s where Sweden will play Japan in one of the two semifinals (USA plays France in Monchengladbach).

Although it took too many years, homophobic Penn State coach Rene Portland was finally kicked out of women’s collegiate basketball. Eucharia Uche, you’re next to go.