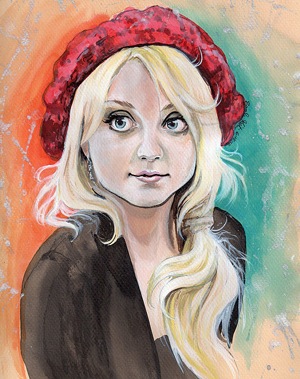 When asked to name a feminist character in J.K. Rowling’s Harry Potter series, one typically singles out leading Harry Potter heroine Hermione Granger, whose brilliant mind and attention to detail basically keep the Hogwarts School of Witchcraft and Wizardry from going completely to shit at the climactic moment of every book. “Hermione, we have screwed ourselves into a battle with life-eating succubi and have also accidentally caused the death of our beloved teacher. Could you fix that for us, please?” And she always does.

But let’s be honest: We all know Hermione could run this entire universe with one wand tied behind her back. Her extreme capability borders on tedious at times. No one enjoys highly effective people; it puts the rest of us off of our Competitive Lounging.

Besides, any fan of the books would likely agree that it is actually the background characters–the parents and friends and teachers of the titular hero–who form the elaborate and tightly woven tapestry that makes this series so compelling. But are any of these tertiary characters feminists? And how does their feminism enable them to aid Harry in his seven-book-long battle to kick the villainous Voldemort’s pasty butt back to hell?

For my first feminist contender, I’m putting forward fan favorite Luna Lovegood, a core member of Harry’s posse of school friends and allies. Sure, when Luna arrives on the scene, she’s taking the Express train to Hogwarts straight from Crazytown. All google-eyed glasses and talk of government conspiracies, Luna, the only child of a tabloid editor, is seen as flighty, to put it kindly.

Yet Luna’s reality is shaped by the hidden truths that she filters out from the usual media noise. Unlike her more sheltered friends, Luna has seen death and injustice. She has seen that the order of things is not as it should be, and it’s that knowledge which allows her to guide Harry and his friends on their mission. She cares deeply about doing what is just, no matter the risks, and that depth of conviction elevates her from “Loony” Luna to not just a trusted ally in the cause, but a person worth risking one’s life (or elf) for.

The hapless (at first) Neville Longbottom is another close school friend of Harry’s whose feminism isn’t splashed all about the page but is quietly displayed in his every action. The quiet son of first-wave heroes who were tortured by the forces of Voldemort (note for non-fans: Voldemort is very bad), Neville provides a fascinating study in cis-male feminism. After his mother was tortured past the point of sanity, he could easily have become the archetypal “Vengeful Manly Man Out To Seek Justice”, but Neville defies this role. He does not recklessly beat down the doors of the offenders or repay violence in kind, but does as we all should when confronted with the victimization of those we love: He teams up with the side of right and works to prevent this same action from happening to others.

Neville never forgets the very real origins of his cause. In my opinion, the most compelling scene in the entire series is when Neville quietly pockets the twisted gum wrapper that his mother, out of both her madness and her love, gives him for Christmas. Neville knows the worth of the fight he is enduring, but more importantly he knows the person he is fighting for.

I could go on–and do when I get a few drinks in me and corner some unsuspecting patron at the bar–but my 50-page treatise on Tonks, Kickass Auror to the Stars, would take up entirely too much server space. My hope, however, is that the children, teens and adults who have or will read Harry Potter will absorb, perhaps even unconsciously, the qualities of these brave characters and will foster those same qualities in themselves and demand them of others. Oh, and if someone can get to work on perfecting the Accio Whiskey spell in real life, I’d really appreciate it.

Erin Curtis blogs regularly for foreveryoungadult.com, a website whose readers have long known that revisiting one's teen years is much better with a cocktail or four. When she isn't insulting Sweet Valley High on the Internet, she's submitting to the demands of her extraordinarily obese cat and attempting to raise her kickass daughter in a way that minimizes later psychotherapy bills.