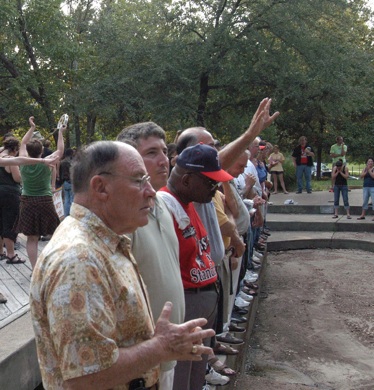 The weeklong Operation Rescue/Operation Save America (OR/OSA) “siege” of Orlando has just two days left, and area women’s health care providers have successfully remained open and operating throughout. The anti-abortion extremist group targeted seven different clinics over the course of the week, surrounding offices and harassing both staff and patients.

Organizers from the Feminist Majority Foundation (FMF)–publisher of Ms.–and pro-choice supporters have been working closely with clinics to ensure their safety, providing on-site assistance at targeted facilities, and reporting threats, harassment and trespassing by OR/OSA followers to local law enforcement officials.

On Thursday, an FMF organizer stopped known extremist Nicholas Heald of Wichita, Kan., as he attempted to invade a clinic. Heald had a pocket knife on his person, but it is unclear whether he intended to use it for violence. Heald was cited by police but not arrested. Heald is ‘friends’ on Facebook with some of the anti-abortion movement’s most extreme individuals, including Army of God adherent Neal Horsley and Operation Rescue President Troy Newman.

In addition to demonstrating outside clinics, extremists are targeting abortion providers at their private residences or at the homes of their family members. At least five physicians and clinic administrators have been harassed in their homes, but no arrests have been made so far.

Image of OR/OSA protestors from Flickr user marklyon under license from Creative Commons 2.0