A Celebrity Making Change in Africa-And Not the One You Think - Ms. Magazine
Skip to content 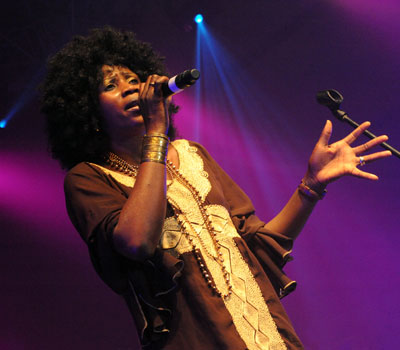 This time, we’re not talking about an Irish guy in aviator glasses. Or anyone who has ever headlined a Hollywood movie. Or a billionaire media empress. We’re talking about fearless West African singer and rapper Sister Fa.

Not yet 30 years old, Fatou Mandiang Diatta, aka “Sister Fa,” has become a global phenomenon. Her music has a groundbreaking sound that combines rap and soul with classic Senegalese rhythms. (Check out a sample here.)

In addition to becoming one of the most famous West African performing artists, Sister Fa has also spearheaded a major campaign to stop female genital cutting (FGC). She and her band organize workshops, lectures and big, free outdoor concerts, seeking to bring awareness through music. In February, she took part in a UNFPA-UNICEF event about the need to end excision. In March, Sarabah–a film about her career as an African hip-hop artist in a male-dominated field and her controversial activism around cutting–won the Golden Butterfly for Best Film at the Movies that Matter festival. It was picked up by Women Make Movies in April. (You can learn more about the film in the current summer issue of Ms.)

Sister Fa’s husband, filmmaker Lukas May, has created his own documentary called Education sans Excision, or “Education Without Cutting.” The trailer provides a window into how she combines individualized community education with massive live performances. A packed audience of men, women and children of all ages cheer and dance as she performs; the euphoria and energy linger as the crowd then gets fired up by her calls for action and social change. UN officials have cited a tactic like Sister Fa’s as more effective than the approaches that others–especially foreign NGOs–have taken.

Sister Fa has said she would like to make the tour an annual event. She has partnered with the organization Tostan, a Senegal-based community-led non-profit organization, to get other artists involved in the cause. Fifteen musicians from different African countries have signed on, and will be featured in two new songs about FGC debuting on Sister Fa’s 2012 tour.

The drive to end FGC is gaining official traction: At its 17th Annual Summit this summer, the African Union officially recognized the practice of FGC as a gross violation of the rights of girls and women. The World Health Organization (WHO) estimates there are 91.5 million victims of the practice over the age of 9 in Africa today. Every year, another 3 million girls are at risk of genital cutting. The African Union agreed to support the United Nations’ draft resolution to adopt a worldwide ban on the practice. In Senegal, Tostan, UNFPA, UNICEF and the government have created a national action plan that aims to eliminate FGC in the country by 2015.

Sister Fa, a self-identified victim of female circumcision, said in a recent interview that there is a failure of communication and education from people working to ban the practice. She argues that Westerners in particular confuse the issue by calling it “mutilation” when in fact parents are trying to protect, not harm, their children by conforming to societal norms. As a hip-hop artist, she says, it is her duty to educate.

For a continent in which almost half the population is under 15 years old, Sister Fa’s fierce combination of talent and activism may be the most effective formula for social change.

Photo by Uelef from Wikimedia Commons under Creative Commons 3.0.