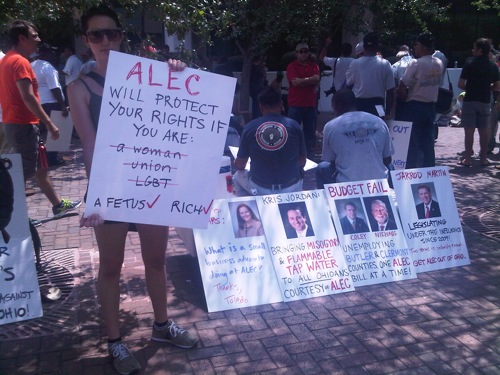 Yesterday I joined more than 100 activists from as far away as Pennsylvania and Michigan to protest the American Legislative Exchange Council’s annual meeting in New Orleans. The shadowy group–a corporate-funded, right-wing “membership organization” of state politicians that supplies its members with “model legislation” to take back to their home states–has come under mounting scrutiny, with recent exposés by The Nation, Ms., the Center for Media and Democracy, ProPublica and others.

Thanks to the awesome work of activists, researchers and journalists, the public now finally has access to hundreds of ALEC’s model bills. They demonstrate clearly that the group protects the interests of corporations and private industry at the expense of the American people. “ALEC’s priorities for the 2011 session included bills to privatize education, break unions, deregulate major industries, pass voter ID laws and more,” reports The Nation.

Women are not ALEC’s only target, but the group’s free-market, profit-first model legislation disproportionately hurts women, who make up the majority of public sector workers, the majority of the heads of single-parent households and the majority of dependents on Medicare.

My grandmother was a secretary. She was let go because she was “well on her way to motherhood.” She was only three months pregnant. With legislative measures like at-will employment, ALEC wants to return women to this time.

Since Medicaid helps low-income pregnant women, the elderly in nursing homes (most of whom are women and two-thirds of whom are Medicaid-funded) and disabled children and adults, you can imagine the consequences [of ALEC’s model legislation]: a 90- year-old woman evicted from her nursing home, an autistic child no longer given aid, a young pregnant woman unable to afford prenatal care.

Over 1,000 state anti-choice bills have been introduced since January, many by legislators who are also members of ALEC. The group’s model legislation includes a “Parental Consent for Abortion” act. This attention to women’s choice seems to clash with ALEC’s stated principles of free-market federalism and limited government. Why is an organization that is ostensibly economically driven trying to control women’s bodies? Ask Ohio ALEC member Jarrod Martin, and he’ll tell you that we need more babies so we can compete with China. In this worldview, it seems women are baby-making factories for the future benefit and profit of big corporations.

Whether ALEC members copy and paste the model legislation when introducing it into state legislatures or simply draw inspiration from the agenda set forth at the meetings, what ALEC does is a perversion of democracy. Cushioned from reality by their corporate and political backers, ALEC is far removed from the struggles of working people on the ground. That is why women like me came to New Orleans. Like the ALEC protest in Cincinnati in April, this was about making ourselves known and our voices heard.

Part of ALEC’s game is scapegoating: blaming teachers for the deficit, immigrants for stealing jobs, poor people for not trying hard enough. It is imperative that we do not buy into these divisions. This is not just a feminist issue, nor is it just a labor issue. We must realize that this struggle will not be won by defeating one piece of legislation or another. We have to fight ALEC, and we have to work in our own communities to foster the kind of society we want to see. I want to see a happy, healthy, diverse, well-fed, educated populace–but that’s a different vision of the United States than the one ALEC and its corporate backers are pushing.

Elisabeth Ampthor is a Cincinnati activist and organizer in the national group ProtestALEC.org.