In a previous post I’ve argued against framing a preference for boy children as “culturally ‘Asian.’” New data from Gallup, sent in by Kari B., shows that this preference is alive and well among Americans, at least among men. While women are most likely to have no opinion and are about equally likely to prefer a girl or boy, men are significantly more likely to prefer a boy. This preference is strongest among younger men, but still present among men over 50. Whereas women become increasingly indifferent with age and, secondarily, begin to prefer girls. 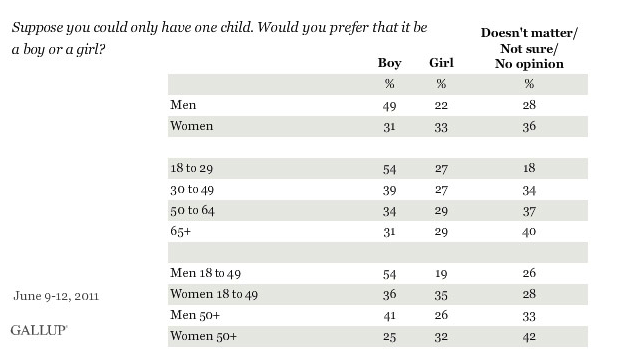 CNN editors note that, since children are mostly born to young people, and indifferent women may bend to men’s preferences, new sex-selection technologies threaten to create a gender imbalance in the U.S.

Reprinted with permission from Sociological Images.