Rise of the Planet of the Apes Provides Lessons in Liberation - Ms. Magazine
Skip to content 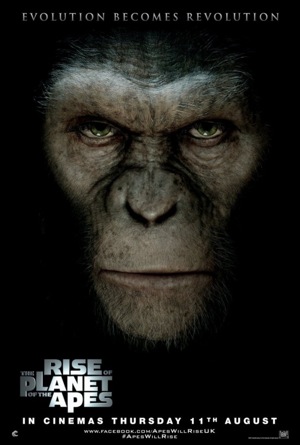 A chill-inducing moment turned Rise of the Planet of the Apes, a potentially campy summer action movie, into serious drama. It occurred right after the prison guard Dodge Landon (played by Tom Felton) delivered the iconic phrase from the original Planet of the Apes, immortalized by Charlton Heston: “Take your stinking paws off me, you damn dirty ape!”

Sure enough, the recognizable line drew guffaws in the movie theater where I watched Rise of the Planet of the Apes, Rupert Wyatt’s loose prequel to the sci-fi classic, which imagines how humans’ scientific experimentation on apes led to their world takeover. However, the campy line was soon followed by an impressive pause, in which our hero Caesar (a CGI ape humanized by Andy Serkis) stood upright, stared defiantly at his oppressor, and then spoke his very first words in the film while tightening his grip:

And just like that, the giggling came to an abrupt end. The audience (myself included) reacted in stunned silence, give or take a few audible gasps. And slowly, ripples of applause made their way through the theater.

“No!”  A simple word transformed an ape character into a human being worthy of respect, the way an ape’s simple grasp of a bone signaled “evolution” in Stanley Kubrick’s 1968 film 2001: A Space Odyssey, which came out the same year as the original Planet–during a time of racial, political, and social unrest.

I have always watched the series of Planet of the Ape films like other black audiences: understanding subconsciously that these movies were metaphorically about “us” and our oppressed “condition,” understanding that our imagined “takeover” reflected white fears about the upending of racial hierarchies. After all, African-descended people and the apes from the same continent were constantly linked in racist scientific rhetoric and in popular culture (think King Kong and the fear of black masculine primitivism).

As Richard Von Busak notes in his essay, “Signifying Monkeys: Politics and Story-Telling in the Planet of the Apes series,” the original film may not have been intended as a racial metaphor, but the subsequent movies were much more blatant in their political allegory. And since Hollywood has yet to make an epic movie based on actual black slave uprisings in history–represented by the likes of Toussaint L’Ouverture in Haiti or Nat Turner and Harriet Tubman here in the U.S.–I will gladly take my sci-fi racial liberation metaphors where I find them. Rise of the Planet of the Apes is loaded with them.

I find it curious that this particular series from the sixties and seventies is presently receiving a re-boot at the same time a more “serious” drama, The Help, sanitizes the turbulent Civil Rights era. Give me Ape uprisings and racial symbolism over dishonest historic depictions any day of the week.

“Get down with your bad selves, my cousins!” I exclaimed at the screen, with fist in the air. “Power to the People–err Apes!”

The film fully embraces its parallels to African American history beginning with the very first shot: a camera pan over a group of chimps running wild and free in the “Motherland” that is the jungles of Africa. Then comes a scene right out of Alex Haley’s Roots, in which one of the ape members is captured like Kunta Kinte and later shipped to “civilization,” now represented by a scientific lab in San Francisco.

As the slavery metaphor continues, it’s fraught with racial and sexual allegories. The camera provides an extreme close-up on the brown eyes of our captured ape, then zooms out of the “blue eyes” of the relocated female chimp, known as “Bright Eyes.” We later learn that Bright Eyes has been given an experimental drug called AZL-112, developed by the scientist Will Rodman (James Franco) who is desperately seeking a cure for the Alzheimer’s that has ravaged the mind of his father (played brilliantly by John Lithgow). This drug has the effect of not only changing Bright Eyes’ natural brown eyes the color blue, but also enhancing her intelligence to equal that of with human beings. Thus blue eyes, often associated with Caucasians, are equated with higher intelligence. Her transformation also echoes the historical creation of the New World “mulatto,” especially since her “enhancement” via blue eyes recalls eugenicist arguments for the racial superiority of mixed-race subjects due to their “hybrid vigor.” Except in this case, gene technology, not eugenics or sexual exploitation, gave birth to a new hybrid.

Bright Eyes is extremely important to this “origin” story, for she will be gunned down when she suddenly goes “ape” in the lab, all the while hiding her newborn infant, thus contributing to a common sexist trope in liberation movies: The female body becomes the sacrificial vessel from which our hero springs.

If the origin myth hits some wrong notes, the liberation narrative that follows is surprisingly politically astute. The genetically enhanced baby ape, Caesar, is adopted by human scientist Will, and their vexed bond forms the heart and soul of the film. Despite Caesar’s displays of human intelligence, Will treats him more as a pet than a son. Caesar is later carted off to a prison-like animal sanctuary, where, in the grand tradition of “prison break” narratives, he comes of age and establishes his new role as revolutionary leader. His growing sense of solidarity with his fellow apes is dramatized when Will later confronts the upright-standing, talking Caesar and still treats him as though he were not his equal. When Caesar consciously chooses to reject his “father” (or master, if we’re going by the slave metaphor), his choice is one of asserting independence and freedom, which is far more significant than standing up to and defeating the prison guards and state troopers who get in his way.

As for Will, his lack of growth, in contrast to Caeser’s artificially accelerated development, is astounding in its canny illustration of white male power and privilege. It’s a heartbreaking parable about the need for the oppressed to resist such power at all costs for our own liberation, no matter how benevolent and loving the care we receive. The mental deterioration of Will’s father serves as a powerful metaphor for the loss of patriarchal, anthropomorphic and scientific control over nature–about which Caroline (Freida Pinto), Will’s partner and zoo veterinarian, forewarns him. (It’s unfortunate that her role is limited to Cassandra-like unheeded prophet).

Among the few major black characters is Steven Jacobs (David Oyelowo), one of the movie villains, a corporate exec who greenlights the development of a newer strain of Will’s drug–not understanding that while it accelerates ape intelligence, it has a reverse effect on humans. However, I see Jacobs as someone who is cast to racially “neutralize” the story, along with the black men who carry out acts of violence, from the poachers in the African jungles to the security guard who kills Bright Eyes. If the audience is already inclined to cheer on our “blue-eyed” heroes (even though they are apes) while the villainous humans are aligned with these various “black brutes,” the racial hierarchy of the film remains in place even as it challenges the racial hierarchy in the story.

Despite these limitations in its gendered and racial representations, Rise of the Planet of the Apes is still a powerful recycled story of liberation, arriving at a crucial moment as our economic recession widens the racial wealth gap. It reminds us that the important steps toward mental and physical freedom often begins with a simple word of resistance: No.

Poster for Rise of the Planet of the Apes.