Women Writers Still Need a Room of Their Own - Ms. Magazine
Skip to content 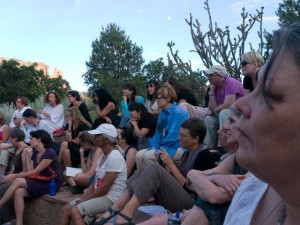 I had been longing to go back to Abiquiu, New Mexico, where I had the remarkable experience of visiting the artist Georgia O’Keeffe in 1973. I finally got my chance this past month through the generosity of A Room Of Her Own Foundation, which awarded me an artist-in-residence grant (I create “artist’s books”). AROHO, as it is known, hosts a bi-annual retreat for women writers at Ghost Ranch–15 miles down the road from O’Keeffe’s winter home in Abiquiu, and another place where she famously lived and painted.

Early in the retreat I met Mary Johnson, who was the inspiration for creating the foundation. Johnson had gone to India in the 1970s as a very young nun to join the order of Mother Theresa. After leaving the order years later, she was still working for the Catholic church but wanted to go to college. In 2000 she met Darlene Chandler Bassett, a newly retired corporate executive, at another Ghost Ranch women’s retreat. Both were at pivotal points in their lives. Johnson’s desire for “a room of her own, and a chance to write” inspired Bassett to help her–and others. Bassett told Johnson she would pay her college tuition if Johnson would help her create a foundation for women writers. AROHO, their creative partnership, is now responsible for 10 years of programs that support writers by providing publishing opportunities, Gift of Freedom Awards and bi-annual retreats like the one I attended. (Mary now has that room of her own, and given the chance to write she’s come up with the book An Unquenchable Thirst: Following Mother Teresa in Search of Love, Service, and an Authentic Life, which will be published in September by Spiegel & Grau.)

At the retreat, keynote speaker Marilynne Robinson spoke eloquently about writing: “You are your primary resource … Find your deepest access to your own testimony,” she advised. Barb Johnson, an AROHO award winner, encouraged us to know what we want, not what we can eke out or patch together, but what big thing we really want. That idea, knowing what you want, became a major theme of the retreat.

As part of the program, I showed a video by filmmaker Susan Mogul, in which I appear, about the Woman’s Building; it’s a trailer for the upcoming Doin’ It in Public exhibition at Otis College of Art and Design’s Matz Gallery (October 1, 2011 through January 28, 2012). Michele Kort’s article “When Feminist Art Went Public,” in the new issue of Ms. magazine, recounts the exhilarating time in the 1970s when women artists were claiming lots of rooms as their own. Michele should know: She was there and so was I. We spent part of our 20s running the galleries, paying the bills and getting a lot of flushed-with-freedom feminists to work together at the pioneering feminist art center.

Mogul’s video was followed by a video interview with Mary Johnson, and I woke up early the next morning thinking about how she and I both followed charismatic women to work in communities of women. I had followed Judy Chicago to California to be part of the Feminist Studio Workshop (the women’s art school that was central to the Woman’s Building), and Mary had gone to India as an aspirant to the Missionaries of Charity. Very different life paths, but much in common.

Since I now live in rural Kentucky, it is rare for me to get the opportunity to talk to other women writers and artists in such an informal setting. Our week together allowed time for intimate conversations, connections to be made and friendships to begin–all under the immense blue New Mexico sky that so inspired O’Keeffe.

I left with a number of new books on my reading list, including these by writers I met at the retreat: Breena Clarks’ Stand the Storm, Lucia Orth’s Baby Jesus Pawn Shop, Marilynne Robinson’s Home: a Novel, Ghost Ranch librarian C. S. Merrill’s Weekends with O’Keeffe, Summer Wood’s Wrecker, and many others.

The last session I attended was about blogging, led by Tania Pryputniewicz. Along with providing feedback on one another’s blogs, we held intense conversations about being called “selfish” just because we want to create our own work or have time for ourselves. Now, along with my book-reading list, I’ll be following Tania’s blog.

Photo of women writers on retreat under the New Mexico sky, courtesy of Susan E. King

Susan King is an artist and photographer. She lives in Kentucky. www.susanking.info