Take a glance at the recent BMW ad (left) and you’ll know that the road to car sales is still paved, just as it has been since its construction, with sexist, heteronormative, racist and outright offensive advertisements.

When AOL.com recently ran this vintage Goodyear tire ad, which it deemed one of the most sexist ads ever as part of its recent article about a new potentially sexist product, the knee-jerk reaction from the 861 people who commented, 1,012 people who ‘liked’ it and countless others who viewed the article, was probably, “Wow, thank Gloria Steinem things sure have changed since then!” Unfortunately, this sentiment is as inaccurate as the assumption that women are inherently bad drivers, incapable of changing a tire or driving down a straight road without hitting something.

We do have to agree that, back in the day, sexist car advertising was pretty much the only kind. Check out this 1964 Buick Riviera commercial:

Or this vintage Volkswagen Beetle ad:

And how about this misguided Subaru GL Coupe ad:

In the 1970s, however, thanks in great part to feminist magazines such as Ms., companies and advertising agencies were alerted to the large consumer base of intelligent, capable, empowered women–and that led to some feminist advancement in car advertisements. Not only were there nonsexist advertisements, but car companies actually marketed their products to women as informed, financially independent consumers. This new body style for advertisements included the ads below for Subaru and Honda Civic, which each appeared in 1974 issues of Ms. 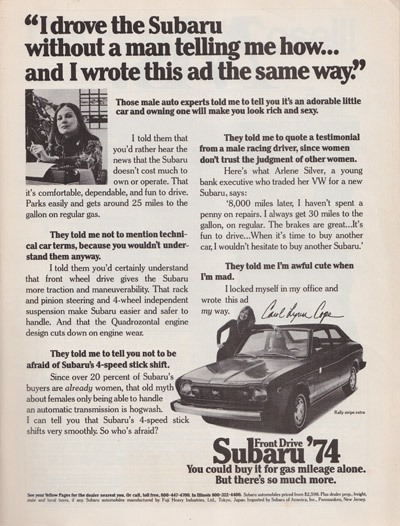 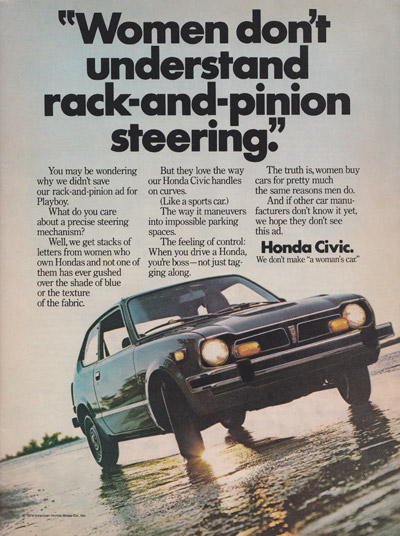 Despite this brief-but-inspiring run of feminist-friendly car ads, sexist (and racist and heteronormative) car ads have remained an offensive, ugly, rusty thing of the present. Automotive companies are still operating under notion that women are objects to be used to hawk products that they are simultaneously considered incapable of using, as this Fisker Karma Plug-In Hybrid commercial suggests:

Car advertisers seem to assume that car buyers are either masculine, heterosexual, misogynist single men, or traditional, white man-woman-children families (who want minivans, of course). Just ask Ford Flex (below) the sort of women they’re selling minivans to (hint: primarily blonde, totally white, and probably not working outside their homes).

Although our responses are getting bigger,  sharper, and more innovative, as shown by the spray-painted response to a sexist Fiat billboard (above), taken in London 1979 by Jill Posener, and the video response (below) to a sexist Dodge Charger 2011 Superbowl commercial, offensive gems such as this Toyota Yaris commercial (which has subsequently been discontinued) continue to be released by car companies worldwide.

Maybe it’s time the car companies come out with a new model of advertising.

Have an offensive car advertisement to share? Feel marginalized by the automotive industry? Have a problem with the under- and misrepresentation of women in car ads and marketing? Let us know!