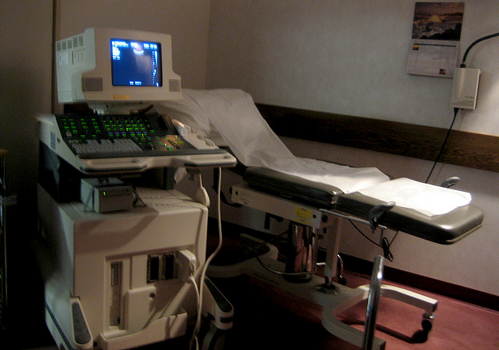 In what I’m calling a “half-win,” U.S. District Judge Sam Sparks has blocked certain parts of a law recently passed in Texas requiring doctors to perform pre-abortion sonograms. The law still requires the sonogram, but no longer requires doctors to describe the images to their patients or requires women to hear the descriptions since this, as Judge Sparks ruled yesterday, violates doctors’ and patients’ right to free speech.

According to the Associated Press, supporters of the law believe that the sonogram “ensures women fully understand what an abortion entails,” suggesting that if they did, fewer would decide to have an abortion. What supporters of laws like this don’t seem to understand, however, is that women are not idiots.

The idea that women who choose abortion don’t “fully understand” what the procedure entails is preposterous, patronizing and offensive. Of course women understand what abortion entails! Yet women still choose to have abortions.

Women also fully understand what pregnancy, childbirth and the choices that come after entail, and for many, abortion remains the least expensive, least physically dangerous and least emotionally devastating option. Women know what abortion is, and the majority of women still want to be free to make that choice whether or not to have one. Laws requiring sonograms are not made for educational purposes; they exist as a tool to shame, scare and guilt women out of their decision to have abortions. You can bet that if men could get pregnant and have abortions, no one would question whether they “fully understood” their decision to have one.

In a thinly veiled attempt to seem compassionate, proponents of the Texas law included a provision to exempt those who became pregnant by rape or incest. But in order to get the exemption, women would have to disclose this information to their doctors and it would become a part of their medical record. Judge Sparks questioned the motive behind this provision, writing,

(It) is difficult to avoid the troubling conclusion the Texas Legislature either wants to permanently brand women who choose to get abortions, or views these certifications as potential evidence to be used against physicians and women.

Sparks also blocked provisions that would punish physicians who failed to comply with the law, including losing their medical license and possible criminal misdemeanor charges.

Nancy Northup, president and CEO of the Center for Reproductive Rights–the organization that challenged the law–wrote that the ruling was a “huge victory for women in Texas and a clear signal to the state Legislature that it went too far when it passed this law.”

A victory, yes, but I’m not ready to start celebrating. After all, the law still requires the pre-abortion sonogram, a procedure that is medically unnecessary unless a physician deems it in the best interest of the individual patient. And Judge Sparks’ ruling may be overturned on appeal. Whether or not it will be upheld and/or set a precedent for sonogram laws in other states remains to be seen.