Living on a Prayer? Latinas Need Jobs and the Ability to Live With Dignity - Ms. Magazine
Skip to content 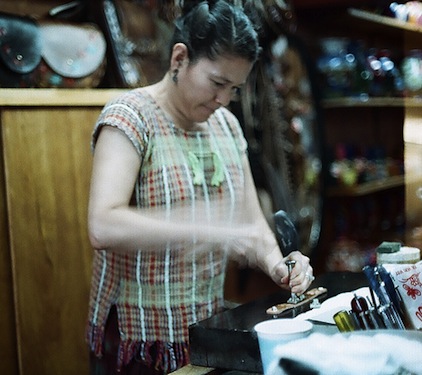 Economic security has been a major concern for everyone, but perhaps especially so for Latinas. Studies indicate that Latinas had an 11.4 percent unemployment rate in August 2011, compared to about 9 percent overall. And when they work, Latinas earn, on average, less than sixty cents for every dollar earned by a white male. That’s why the jobs bill the President introduced to Congress last week is so important for Latinas. The bill includes provisions that will extend unemployment insurance that will benefit 1.1 million Latinos who have been out of work for six months or more and increase the paychecks for 25 million Latino workers through reduced payroll taxes.

Much of the hard work that Latinas do involves low wages and minimal worker protections. In addition, even working Latinas are uninsured at a high rate. In 2008, the median income for Latinas was $16,417, compared to a median income of $20,867 for women of all races, $24,003 for Latinos and $33,161 for men of all races. Given this disparity, and the expense of healthcare, it is not surprising that 38 percent of Latinas were uninsured in 2008—the highest rate of all groups of women.

Jobs are a huge piece of establishing economic security for Latinas and for all Americans. But they are not enough. In these tough economic times, it is necessary to keep a broader perspective: one that recognizes that work is not what makes one a person worthy of living in dignity and that public programs have an important role to play in improving the lives of all of America’s people.

Right now debt ceiling talks are under way. Their ultimate resolution: a committee tasked with cutting billions of dollars from the U.S. budget. While programs on which Latinas rely already took a hit during the framing and passage of the debt ceiling bill, it is foreseeable that over the next few months the committee will unveil cuts to other social programs, such as Social Security, Medicare and Medicaid. These programs help keep our hard-working families afloat in these tough economic times when even the hard work that many Latinas are accustomed to doing—agricultural work, meat and poultry packing, and beauty services—is hard to find.

Social Security is a major concern for Latinas, as it is the most common source of income for 88 percent of Latinas in the 75+ age bracket. And Medicaid funding has serious effects on Latina healthcare—Latinas comprise over 17 percent of women of reproductive age who receive Medicaid, and over 20 percent of Latinas access reproductive health services at clinics that receive funding under Medicaid, such as community health centers (CHCs) and Title X clinics.

Our President’s message has come through loud and clear, and he’s right: we do need to create more jobs. But the difficulties faced by too many Latinas today show that employment is just one aspect of economic security. Without basic services—support when you lose your job, get sick, or retire—a job is just a job, not a solution to insecurity. And what America needs is a solution—a way to ensure that all of America’s communities can live better. Keeping up the fight to protect basic services keeps us on the road to reaching that goal.

Anjela’s research and other work at NLIRH focus on analyzing immigration policies that disproportionately affect Latina health and promoting policies to help eliminate health disparities. Anjela received her J.D. and M.A. in Government from the University of Texas at Austin in 2011. While in law school, Anjela was an advanced student in the Human Rights Clinic, as well as a member of the Chicano Hispanic Law Student Association, the Texas International Law Journal, and the Texas Hispanic Journal of Law and Policy. Outside of the law school, Anjela provided volunteer translation services and U Visa assistance at American Gateways, staffed Texas RioGrande Legal Aid's Telephone Access to Justice Project, and served as a pro bono law clerk at Catholic Charities of Central Texas Immigration Legal Services. In recognition of her commitment to public interest law, Anjela was honored by the William Wayne Justice Center for Public Interest Law as a Public Interest Scholar. Prior to law and graduate school, Anjela received her B.A. in International Development, International Relations, and Latin American Studies (with a minor in German) from Tulane University (Newcomb College).