Unions Provide the Route for a Secure Future to Women and Their Families - Ms. Magazine
Skip to content 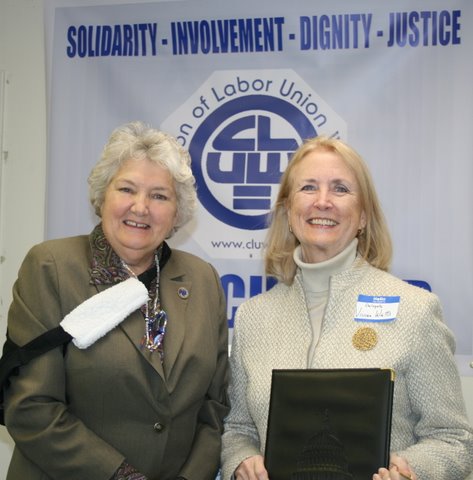 On September 7-10, the Coalition of Labor Union Women (CLUW) completed our 16th Biennial Convention, where we recommitted ourselves to those priorities that are so critical to working women and their families. The highest priority at our founding convention 37 years ago and now is JOBS! But when we talk about jobs we mean decent jobs at union wages, with union negotiated benefits and at union negotiated salaries: Jobs that will support a decent standard of life for women and their families.

Today labor and women are the focus of the twin attacks by the right wing that are committed to taking back our hard-won rights–whether in the form of reproductive rights or our right to a voice in the workplace through the collective bargaining process.

First Lady Eleanor Roosevelt once said, “There are only two ways to bring about protection for workers…. legislation and unionization.”

Yet, throughout the country, in state after state, public employees, nurses, teachers, librarians, social workers, firefighters, etc. are under a right-wing assault to destroy their way of life by eliminating collective bargaining and other rights under the guise of fiscal responsibility. This is a smokescreen for an all-out attack on the right to form unions and to bargain collectively for a better life for oneself and one’s family.

Women in particular are suffering under this onslaught.

A collectively bargained voice for workers is a way for women to secure a decent life for themselves and their families.

So as reactionary elements in the United States hope to dismantle our rights, labor and women join hands to fight back–and fight back we will, and win we must!