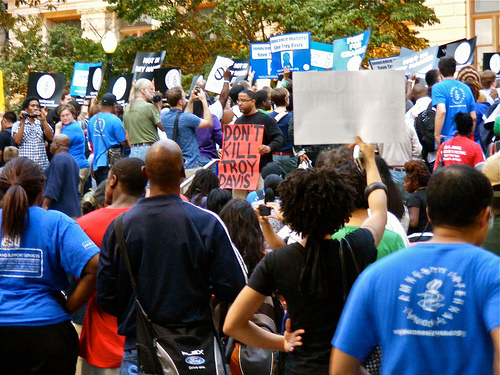 Like countless people across the globe, this week we were glued to coverage of the impending execution of Troy Davis. In 1991, Davis was convicted of, and sentenced to death for, the 1989 murder of  Mark MacPhail, an off-duty police officer in Savannah, Georgia. There was no physical evidence against Davis, and the prosecution’s case was based entirely on witness testimony. Since the conviction, seven of the nine witnesses from the trial have recanted or contradicted their testimony, many claiming that they were pressured or coerced by police into testifying or signing statements against the defendant. One of the two remaining witnesses who haven’t recanted is Sylvester “Redd” Coles, the principle alternative suspect (nine people have  signed affidavits implicating him in MacPhail’s murder.)

Early in the week, there was an atmosphere of passionate determination to mobilize supporters to save Davis, and cautious hope for the best. On Monday, Davis’ attorneys appeared before the Georgia State Board of Paroles and Pardons to make a case for clemency based on new evidence that had emerged since 1991. Imagining the worst, the Crunk Feminist Collective characterized the act of executing Davis as “lynching remixed:”

We cannot understand the killing of Davis outside of a long history of lynching Black men (and women and children) for crimes that they didn’t commit, and often when no crimes were even alleged.

When the parole board released its decision to deny Davis clemency on Tuesday morning, the response was overwhelming. But while Davis’ supporters were  unwavering and growing in number, optimism was beginning to fade. At Clutch Magazine, Kevin Powell grappled with the reality that nothing short of a miracle would save Davis. And with less than 24 hours before he was scheduled to be killed, time was running out.

However, upon learning that the board had denied him clemency, Davis gave his supporters every reason to keep fighting when he released this statement:

The struggle for justice doesn’t end with me. This struggle is for all the Troy Davises who came before me and all the ones who will come after me. I’m in good spirits and I’m prayerful and at peace. But I will not stop fighting until I’ve taken my last breath.

In this spirit, last-ditch calls to action to help stop Davis’ impending death by lethal injection continued to spread virally across the web.

In the dire hours before the scheduled 7 p.m. execution on Wednesday, Colorlines’ Akiba Solomon asked an incisive question:

Barring a miracle of conscience, the state of Georgia is going to execute Troy Davis at 7 p.m. for a crime he did not commit. I’d like to know where the racialized anti-abortion movement is now. Where is Life Dynamics, the group behind blackgenocide.com? Where do they stand on legal lynching?

Throughout the day, thousands of anti-death penalty activists gathered around the world to protest the execution of a man whose case, at the very least, contained reasonable doubt. Racialicious compiled an assortment of voices trying to make sense out of Troy Davis’ fate as he entered what would be his final hours. Folks around the world tuned into the six-hour Democracy Now! live web broadcast from outside the Georgia Diagnostic and Classification prison, where host Amy Goodman spoke to Davis’ family and supporters as they waited to see whether the Supreme Court would grant a stay of execution.

Despite widespread outrage, the Supreme Court denied the request for a stay and Davis was killed by the state of Georgia at 11:08 p.m. He maintained his innocence up until his last breath.

Arturo R. Garcia started an open thread at Racialicious for readers to talk about what they had witnessed. Colorlines posted a wrenching collection of photographs of the vigil outside the prison,

The pain of Troy Davis’ death was felt by hundreds of thousands of people all over the world. But as Amnesty International’s Brian Evans wrote hours after the execution, “Tonight we mourn … tomorrow we organize!” In that spirit, check out this list of ways you can honor Troy Davis by getting involved in the effort to abolish the death penalty.

ABOVE: Rally for Troy Davis in Atlanta on Tuesday, September 20, 2011. Photo from Flickr user mouserz under Creative Commons 2.0.