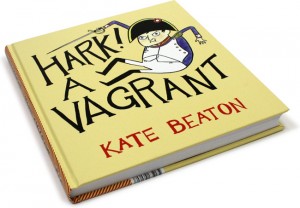 Comics often get a bad rap when it comes to their portrayals of women. In many cases these critiques are well-deserved; In others, this generalization is unfair; women in comics  are vibrant, hilarious, and sometimes more stereotype-defying than their counterparts on TV. Enter Kate Beaton, author of the immensely popular Hark, a Vagrant, and one of the most prominent comic artists to have emerged in recent years.

Beaton  regularly focuses on historical and literary figures, showing them on their days off and using modern speech and thus making them more seem more relatable and human (and funnier) than they way history books often portray them. If you ever wondered what it might be like to go dude-watching with the Brontes, or how the Curies might have hung out in the lab, Beaton’s comedic musings offer both laughs and an alternative, more whimsical way of thinking about history and literature.

Where her drawing style is simple, her humor is smart–and she’s not afraid to take on the present as well as the past. One of her most recent comics satirized “strong female characters” as mainstream media would have them—declaring “sexism is over” while still wearing almost nothing. (Conversely, her Sexy Batman doesn’t mind showing off a little skin either.) In her creative approach to history, Beaton has found humor in almost any situation, from wondering what Nancy Drew novels would have been like if their plots had been based on the covers, to how “Suffragettes in the City” might have had difficulty getting taken seriously, to even the bloody French Revolution. Whether you get all the references or not, the unique subject material and style will challenge the way you’re used to thinking about comics.

The first Hark, A Vagrant anthology is now available from Beaton’s website and from Amazon, and the artist will be on tour signing books.