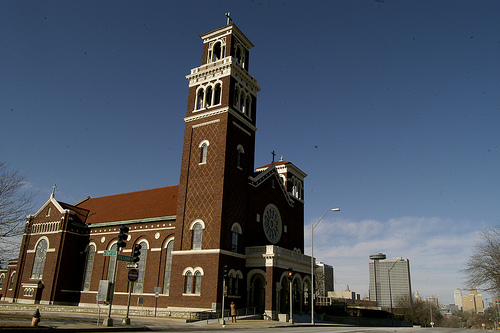 After 25 years of publicly known Catholic priest abuse scandals in the U.S., a bishop has finally been called to the legal carpet for harboring an abusive clergyman.

Bishop Robert Finn of the Kansas City (Mo.)–St. Joseph Catholic diocese was charged today by Jackson County prosecutor Jean Peters Baker with one misdemeanor count for failing to report suspected child abuse. As the Ms. Blog reported, Bishop Finn had known that the personal computer of now-indicted Fr. Shawn Ratigan contained images of young girls, some naked, and yet Finn simply moved the priest to another Church position–working with nuns. Nonetheless, according to a civil lawsuit, Ratigan still, among other parish-related activities, attended children’s birthday parties and, with the bishop’s permission, presided over a girl’s first Communion.

The diocese itself was also charged. Finn has pleaded not guilty, as did lawyers for the diocese.

The Survivor’s Network of Those Abused by Priests (SNAP) had this to say about the indictment:

This is a good start. We believe others on the church payroll also concealed crimes, misled parishioners and endangered kids. They too should face consequences.

These guys have the best lawyers money can buy. They’ll exploit all their political clout and connections and take advantage of every possible technicality they can find and every ounce of influence they can possibly muster. So no one should get complacent now. It’s still important for every single person who knows anything about clergy sex crimes and cover ups in Kansas City to call police and prosecutors.

According to The New York Times, it was just three years ago that Bishop Finn–who is affiliated with the conservative, controversial Catholic movement Opus Dei–settled sexual-abuse lawsuits with 47 plaintiffs for $10 million, agreeing to report suspected pedophiles immediately to law enforcement.

If Finn is convicted, he could face a year in a jail and a $1,000 fine. Says Prosecutor Baker:

I’ve done my best to make sure that this was a fair process. This has nothing—nothing—to do with the Catholic faith. This is about the facts of the case, nothing more. This is about protecting children.