The Women of OccupyLA Speak Out About Hard Times - Ms. Magazine
Skip to content 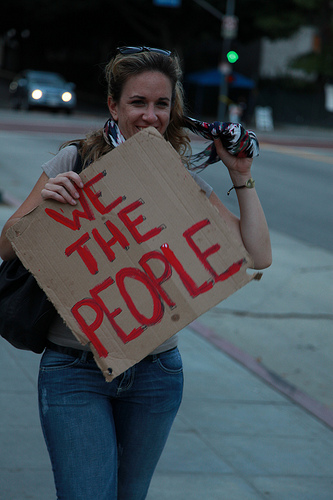 Democracy is not easy, says Occupy Los Angeles on its website.

It requires work and dedication. Most Americans believe that America is on the wrong track, and, for the most part, our representatives have not been representing us. Dissatisfied Americans might also agree that voting is not enough action to break out of this profound cycle of injustice and world-wide destruction. … Change won’t come unless people demand it.

The group stands in solidarity with Occupy Wall Street, of course, and like those East Coast folks holds a People’s General Assembly every evening (in front of L.A.‘s City Hall). Saturday’s Solidarity March through downtown Los Angeles brought out more women to the streets than have been there before.

One woman actually held a pitchfork, while the huge crowd yelled. “We need a new deal, not another raw deal” and “The banks got bailed out, we got sold out.”  As with sister protests being held in other major cities across the nation, the overall tone was angry, fed up and frustrated. Women have plenty of reason to be frustrated by the current economic situation in the U.S.; here are what some of them at OccupyLA had to say about their personal situations: 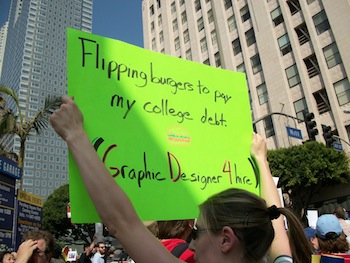 Katie Henderson, 28, is an aspiring graphic designer. After graduating from college in 2004, she has yet to hold a job in her field. Thus far, she has never had a job that required more than a GED. Hailing from Pennslyania, she moved to Los Angeles to pursue animation. But currently she works at a McDonald’s in the Glendale area; she’s concerned with paying off her college loans. Saturday was her first day joining OccupyLA. She says she might have come out sooner but her work schedule did not permit it. When asked why she feels compelled to march in the streets, she said,

Is it too much to ask for the standards of living to be a little better? I paid the equivalent of two brand new cars for my education and I work for peanuts. I should be earning $22,000 to $25,000 per year at entry level. But people want to pay minimum wage. They think $10 per hour is too much. I say to them: Do you know how to design and package ads? 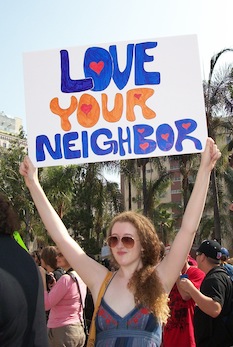 Sara Pierce, who is almost 16, held a sign that read “Love Your Neighbor.” From her manner of dress, she might be mistaken for a neo-hippie, but her reason for being at OccupyLA was because of her mother:

“My mom can’t get a job, and she has a college degree. It’s been really hard on us. I don’t know where my future is headed if my mom can’t even get a job.

Catherine Pierce, 51, Sara’s mother, was in the crowd, too, marching alongside her daughter. As a single mother, her concerns lie in the fact that she is raising a teenager alone but hasn’t been able to find a job in over a year.

Being laid off with a 15-year-old was really hard, and I’ve spent a year looking for work. Our standard of living has been cut in half. I have great skills; I built a company. But I’m 51. Interviewers ask me if I am tired. I was a corporate controller for Germfree Laboratories, a manufacturing firm. I created 72 jobs. The people who worked for me were the most important part of my job. But we all got laid off.

Catherine has had 41 interviews and sent out 240 resumes. She moved to L.A. from a small town in Florida, hoping job prospects would be better in a larger city.  She has tangible ideas for what she’d like to see emerge from the Occupy protests:

We need to return to Glass-Steagall. It was enacted in the 1930s to separate the commercial banks from the investment banks. We need to stop the speculation on Wall Street, which includes day trading. We need to encourage short-term capital gains. The banks are the roulette players and the government is the bookie; they allowed this to happen.

V.F., 38, is a lawyer. She graduated from law school in 2007 in Seattle but has not found permanent work since. In the last six months, even temporary work has been scarce. At the top of her list of concerns are her student loans:

The private sector screwed everything up because they weren’t playing by the rules. The rules are there, but no one is enforcing them. I have an enormous amount of debt and I can’t pay it. 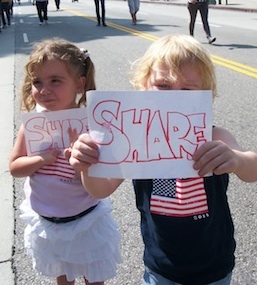 Dani Rowan, 31, is an underwriter for an insurance firm. Though she is currently employed, she said, “I don’t believe that corporate greed is right.” She was out marching with her twin three-year-olds Will and Paige, who both carried signs that simply read “Share.” Related to her work, she spoke about insurance coverage and women’s health, noting shrinking benefits’ packages:

I think women’s benefits have been hit harder. They are the first to be cut. That affects women’s issues more quickly—be it birth control or preventative health. … I have seen my mother get laid off. Not sure if that’s because the corporations think that men are more qualified. When you affect women, you affect the core of society. We are the caregivers. I can’t even imagine what my children will go through. Or how I will put them through school. 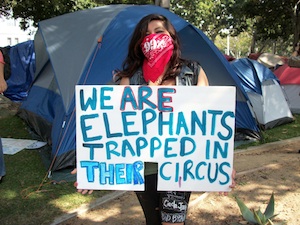 Erica Martinez, 18, is a student enrolled at East Los Angeles Community College. She had taken the bus for the past four days from South Central L.A., where she lives, to the downtown site of OccupyLA. She said:

I’m out here because of my education. I can’t pay for school, my financial aid is getting cut. And I can’t find a job. I just feel my opportunities to grow are being taken away. … My mom says I should find a good man and depend on him. But I don’t want to rely on anyone. I don’t want to depend on anyone but myself.