We Love the Female Orgasm! Do You? - Ms. Magazine
Skip to content 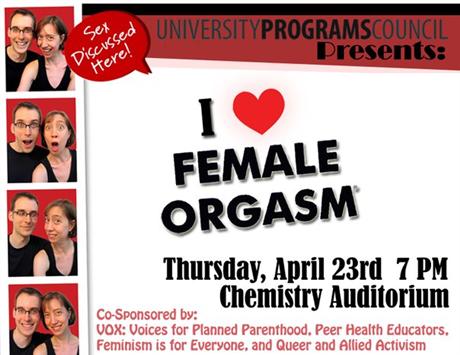 Starting college is pretty exciting; everyone’s meeting new friends, getting the hang of their classes, and, if they’re lucky, learning about female orgasm. A few weeks ago, my college’s Sexual Health Educators brought the program “I Love the Female Orgasm” to our student body. After seeing the attention-grabbing posters around campus, my roommate and I went to the event, not quite sure what to expect. What we ended up seeing was an in-depth presentation on female sexuality and its relation to society. The presenters, Rachel Dart and Marshall Miller (co-author of I Love the Female Orgasm: An Extraordinary Orgasm Guide with Dorian Solot), explored a variety of subjects and asked the audience about our opinions. It was exciting that such an under-discussed, even taboo, subject was being discussed openly; students shared their personal experiences, from the stigmatization of female masturbation to confusion over orgasms.

The presenters like to advertise that theirs is not the usual sex-education program and it certainly isn’t. Even though I grew up in a liberal, open community, my health teacher never talked about such topics. And I know I’m not a special case; many students were shocked at all the new information. For example, during the presentation some students were surprised to learn about the extent of the stimulation process and that some women ejaculate during orgasm. The sexual education system in our country’s schools seems to be stuck in our puritan roots (à la the film Mean Girls: “Don’t have sex because you will get pregnant and die”). Well, it isn’t quite that drastic, but sex is not encouraged and the details related to women, such as the female orgasm and the female condom, are ignored.

A fellow attendee pointed out,

Society in general is so focused on ‘pleasing your man’ (magazines, TV, etc.) and male-focused sexuality. It was liberating to hear about something that I can relate to as a woman.

Colleges and universities all over the country are bringing this program to their students. The turnouts are great; at our school, students were sitting in the aisles to see the much-publicized and much-talked-about program. The fact that so many college students are getting this education (a little late, but better than never) is encouraging. With a recent Guttmacher Institute survey showing that 7 out of 10 teens have had sex by their 19th birthday and that many (46 percent of males, 33 percent of females) don’t receive adequate sex education before they first have sex, more sexual education programs are clearly needed. Hopefully, “I Love the Female Orgasm” will lead to female sexuality being openly discussed, thus bringing about more female empowerment in college-aged women and healthier sexual relationships for all.