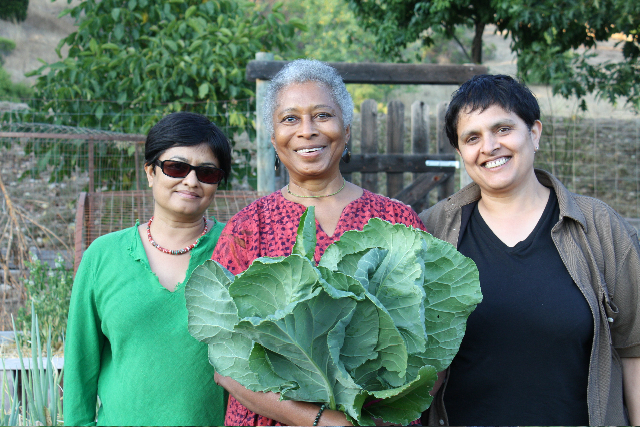 I am the woman: Dark,

—Alice Walker, from her poem “Remember?”

For more than four decades, Alice Walker has used the written word to make visible that which has been made invisible as a result of exploitation and marginalization. Equally as important, she is a humanitarian and social-change agent who has literally put her body on the line for peace and justice. Alice Walker walks her talk. Her living example has inspired and challenged countless individuals around the world to live fully engaged, compassionate lives.

Novelist, essayist, poet, short-story writer, anthologist, teacher, editor, publisher, womanist and activist, Walker is a preeminent American writer–the first Black woman to win the Pulitzer Prize, in 1983, for her ground breaking novel The Color Purple. She also received the National Book Award, and The Color Purple was subsequently made into both a successful film and Broadway musical.

On a very personal level, were it not for her groundbreaking art and activism, along with that of other second-wave Black women writers and cultural workers, my documentary film NO! The Rape Documentary—which unveils the reality of rape, other forms of sexual violence and healing in African American communities—would probably not exist. I, along with so many others, literally and metaphorically stand upon Alice Walker’s shoulders.

And if there were ever a time for the world to have a visual record of Alice Walker’s inspiring journey, now is it.

Internationally acclaimed, award-winning filmmaker Pratibha Parmar has joyously and boldly taken on the auspicious responsibility of documenting the life of her longtime friend in the feature-length Alice Walker: Beauty In Truth. The two women first met in 1991, when Parmar’s dear friend, the late poet and activist June Jordan, along with activist and scholar Angela Davis, introduced the two women. At the time Parmar was in production on A Place of Rage, a documentary for British television on African American women and their role in the U.S. civil rights movement. Two years later, Parmar and Walker were working together, on the poignant and powerful documentary Warrior Marks about female genital mutilation (FGM). The idea came from Walker, who at the time was completing her novel Possessing the Secret of Joy, which explored the life of a genitally mutilated African woman. Back then, voices speaking out against such atrocities were barely acknowledged in the global arena, but Warrior Marks played an important part in encouraging international AID organizations to not treat FGM as culture, but as torture. In addition to the film, Walker and Parmar co-authored the book Warrior Marks: Female Genital Mutilation and the Sexual Blinding of Women.

I don’t believe there is a filmmaker more suited or committed to make an Alice Walker documentary than Pratibha Parmar.

Since starting the film four years ago, along with her partner and producer Shaheen Haq, Parmar has captured a wide range of voices to give insight on Walker, including Gloria Steinem, Yoko Ono, Steven Spielberg, Angela Davis, the late Howard Zinn, Danny Glover, Brenda Russell, Tony Award-winner LaChanze, Beverly Guy-Sheftall, Jewelle Gomez, Evelyn C. White, Allee Willis, Quincy Jones, Jack Kornfield and Arisaka Razak. But as anyone familiar with filmmaking knows, researching and producing a film is one thing; taking it through the expensive land of post-production and into theaters is another.

Parmar and Haq are now in critical need of funding to get this important documentary film across the finish line. They hope to release the film in 2012 to mark the 30th anniversary of the release of The Color Purple. They already have a broadcast deal with PBS’ American Masters, but part of the filmmakers’ agreement with PBS is that, for cinematic integrity’s sake, none of the featured interviewees, including Alice Walker, can contribute any funding towards the project.

That’s where the rest of us can step in. With their credit cards maxed, Parmar and Haq have started a crowd-funding campaign on IndieGoGo to raise a minimum of $50,000. Their ultimate goal is triple that, since they need $150,000 to complete the film.

I was humbled and honored to be asked by Pratibha Parmar to join the fundraising team. Alice Walker’s ongoing contributions to making this world a more humane place is profound. And while I always credit my teacher and mentor, the late Black feminist writer and cultural worker Toni Cade Bambara, with helping me find myself as a Black feminist lesbian cultural worker, Parmar’s films–especially A Place of Rage–played a pivotal role in shifting my gaze and challenging me to use the moving image to make compassionately humane revolution irresistible.

To date more than 20 percent of the $50,000 minimum has been raised. Now the filmmakers have less than two months to raise the rest, so time is of the essence. Donations begin at $10 and go up to $10,000. Pledges are accepted internationally.

With most independent films, especially those made by and about radical women who do not conform to patriarchal and racialized definitions of womanhood (whatever that means!), it takes a global village to transform these womanist/feminist visions into celluloid/digital realities. If there is any doubt about the importance of Alice Walker: Beauty In Truth, I invite and encourage you to view the breathtaking trailer for the film to get a taste of what’s to come with the of the completed film.

As Angela Davis’ so eloquently says in the film,

All of Alice’s writings urge us to think differently and to think critically often about those things we most take for granted. I think that’s what can change the world.

Here’s where you can offer critically needed financial support to Alice Walker: Beauty in Truth.