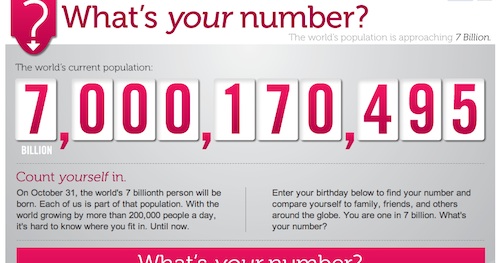 Today, according to projections from the United Nations Population Fund, the global population hit 7 billion—a number that continues to grow by more than 200,000 a day. As Ms. reported in the latest issue (on newsstands now or available here), the increasingly steep climb in the Earth’s population raises serious concerns about sustainability. The Feminist Majority has highlighted some of the most alarming statistics, including:

Ms. publisher Ellie Smeal points out that, “As the population climbs rapidly, unfortunately so does human suffering—mostly among women and children.” Yet the U.S. can focus policy on saving the lives of thousands of women and girls, reducing human suffering, slowing the global population growth and helping to create a more sustainable environment. However, recent budget cuts have eliminated more than $430 million in funding for international family planning programs, and that could be devastating. For every $10 million cut from international family planning and reproductive health programs,