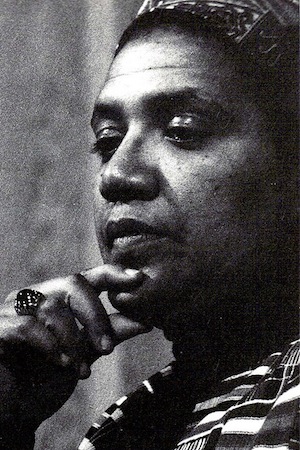 In her piece “Breast Cancer: Power vs. Prosthesis” in The Cancer Journals, black feminist lesbian mother warrior poet Audre Lorde wrote: “I also began to feel that in the process of losing a breast I had become a whole person.”

This courageous insight and numerous others—about her mind, body and spirit being sites loaded with meaning, within a broader personal politic of illness as she faced her own death in 1992—were typical of Lorde. She was a woman too cognizant of how structures in the world sought to limit her, yet still hellbent on self-definition. Thus it is only fitting, as queer awareness and breast cancer awareness come to a close today, that we not only remember but revive Lorde for her significant contributions.

The youngest of three daughters, Audrey Geraldine Lorde was born February 18, 1934, in New York City to Linda Gertrude Belmar Lorde and Frederick Byron Lorde, both immigrants from Grenada. Born so nearsighted that she was legally blind, her mother nonetheless taught her to read and write at the age of four. Her affinity for poetry in part came from her mother, yet cast her as rebellious within the strict confines of her upbringing.

In Zami: A New Spelling of My Name, which Lorde labeled a biomythography, she wrote of experiencing racism and isolation at St. Mark’s and St. Catherine catholic schools, where she received her early education before attending Manhattan’s Hunter College High School. It was at Hunter that she began to gain recognition for her skills as a wordsmith and was elected literary editor of the art magazine. Her first poem was published in Seventeen magazine when she was still in high school.

Continuing her studies, she received a B.A. from Hunter College and also spent a year at the National University of Mexico. She went on to earn a masters in Library Studies at Columbia University and worked as a librarian in New York City public schools from 1961-1968. During this period, despite having discovered a lesbian identity, she married Edward Rollins (whom she divorced in 1970) and gave birth to Elizabeth and Jonathon.

This was also a most prolific period in Lorde’s life as a poet. In 1968, the same year she received a National Endowment for the Arts grant, her maiden volume of poetry, The First Cities, was published by Poet’s Press and edited by the famed poet Diane di Prima, a Hunter College High School friend. That spring Lorde became poet-in-residence at Tougaloo College, a small historically black institution in Mississippi. And there she met Frances Clayton, her longtime partner.

Lorde went on to consistently publish works in the next two decades, establishing her lyrical mastery and fierce political awareness. These include her second volume of poetry, Cables to Rage, in which she confirms her lesbian identity in the poem “Martha”;  From a Land Where Other People Live, which was nominated for a National Book Award, and New York Head Shot and Museum, in which she embraced more outright political subject matter. Her other publications include: Coal, The Cancer Journals, Chosen Poems Old and New and Our Dead Behind Us. In 1988, A Burst of Light, a collection of prose, won a National Book Award.

Sister Outsider also contains her oft-quoted “The Master’s Tools Will Never Dismantle The Master’s House,” a poignant critique of the white feminist intellectual as activist in academia. And in “An Open Letter to Mary Daly” she confronted the philosopher and challenged the racism between feminists in search of a common ground for sisterhood. In my personal favorite, “Transformation of Silence into Language and Action,” Lorde insists on the power of speaking out, because silence will not protect you.

Lorde’s activist legacy spanned the globe. With Barbara Smith and other members of the Combahee River Collective she helped found Kitchen Table: Women of Color Press in 1980, which first published the now-canonical, then-radical This Bridge Called My Back: Writings by Radical Women of Color and Home Girls: A Black Feminist Anthology, among other works. She was an engaged participant in the anti-apartheid movement, being a founding member of Sisters in Support of Sisters in South Africa. She was also instrumental in developing the Afro-German movement, and her influence there, as well as the impact of Germany on her work and life in the U.S., is revisited in the forthcoming documentary Audre Lorde–The Berlin Years 1984 to 1992 by Dagmar Schultz.

Lorde continues to matter today precisely because her consciousness—always so deeply rooted in her multiple intersecting identities—rendered her brand of feminism applicable to anyone who, like her, is determined to fearlessly speak truth to power and walk the path of self-liberation for equality.

She summoned Earth and Sky

Her tongue a ringing bell,

Photo of Audre Lorde in 1980 by flickr user kkendall under Creative Commons 2.0