No Comment: PETA Doesn't Want You to Wear Your Own Hair, Either - Ms. Magazine
Skip to content 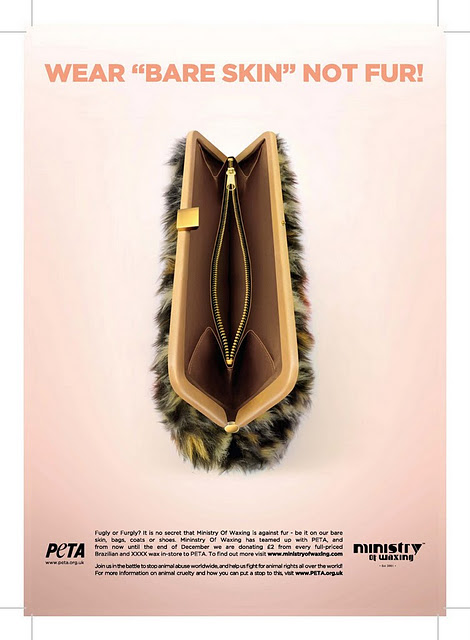 Many of the issues we deal with here at Ms. are very cut-and-dry.

Legislation to let a woman die on the hospital floor? Anti.

Then there’s ending exploitation and cruelty towards animals…Okay, we’re with you there… by exploiting women? Wait, what?

That’s the bind PETA (People for the Exploitation of Tits and Ass?) keeps putting feminists in, as well as other women and women-loving people. Does “it’s for a good cause” excuse exploiting, dehumanizing and sexualizing women? Do we want to get behind animal rights when they’re packaged as caged, unclothed pregnant women on all fours, women marked up as cuts of meat, women being beaten with baseball bats, and (more than once) the likening of our natural pubic hair to clothing made from the skinned fur of slaughtered animals?

Does this ad offend you, or does PETA get a break for a good cause? What do you think will be next from PETA– throwing red paint at au natural vaginas?

Ad from the PETA/Ministry of Wax “furless” campaign.