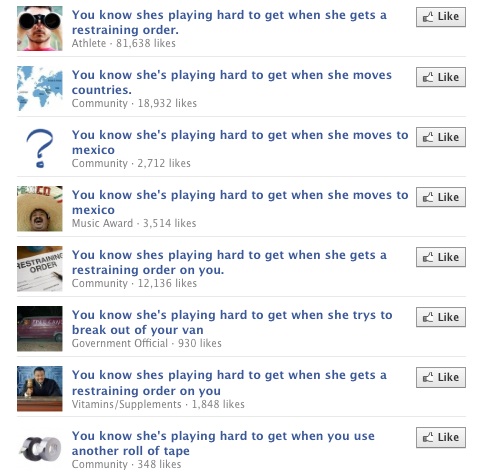 Several new rape-humor pages have already popped up on Facebook in the days since the original pages were removed. Several more were never taken down in the first place, reports the Huffington Post.

Obviously, it would be next to impossible for Facebook to prevent these pages from being created. But there’s also little cause for optimism that once the pages are reported, Facebook will be diligent about deleting them.

When Facebook removed some of the offending pages last week, it made no official comment or clarification of policy. Activists responded by calling for the company to issue a formal statement that rape is never funny and that such pages will be deemed a violation of Facebook rules (which bar speech that is “hateful, threatening or incites violence.”)

Instead, Facebook has done just the opposite: released a statement clarifying that in the future, such pages will be allowed to remain as long as they are clearly labeled as humor.

If Facebook thinks this is all about a misunderstanding, they have not been paying attention. The problem has never been that feminists missed the point that the pages were intended as jokes. We never mistook them for a serious call to go out and commit rape. Our point is that sexual violence is not funny and that reducing it to a punch line perpetuates rape culture.

Statistically, someone is sexually assaulted every two minutes in America (though it is difficult to ever know the accuracy of such statistics in a society that renders so much assault invisible). Many women are harassed or assaulted in some way so regularly—from catcalls to being groped to enduring suggestive innuendo or worse from co-workers to being date-raped—that these things have become normalized as an inevitable part of the experience of being a woman. This is what it means to live in a rape culture. 60 percent of sexual assaults are not reported, often because they assume they will not be believed or taken seriously. This is a culture that allows sexual violence to happen in large part by silencing victims and treating their tales as jokes.

I’ve never met a feminist without a sense of humor, though we are often accused of never being able to “lighten up and take a joke.” This is just one way in which women are silenced in our culture–by being labeled as uptight and prudish when we actually attempt to point out misogyny. In fact, I am a huge believer in both the power and the importance of humor. Satire can be an extremely potent, especially when it takes risks. I have seen laugh-out-loud funny Onion headlines that manage to drive home a point better than any serious journalism I have encountered on some subjects.

But the fact that humor has powerful potential does not mean everything labeled as humor has an inherent value. And when so-called humor uses violence against a specific race, gender, sexual orientation or ethnicity as its punch line, at some point it crosses a line and becomes hate speech. Misogynist, racist or homophobic jokes are never “just jokes.” They reflect and reinforce actual hateful attitudes. When do we say “enough is enough”? If Facebook is bombarded by a multitude of “jokes” about violence against people of a particular race or ethnicity, will a note in the headline that this is meant to be “humorous” make those jokes okay?

Facebook’s belief that you can nullify the harms of hate speech by labeling it a “joke” is simply a cop-out. The corporation’s behavior so far has been condescending and dismissive of women’s concerns. And so we continue to call on Facebook to issue an apology and take a firm stance against the promotion of sexual violence. Anything less is simply unacceptable.

You can add your name to this Change.org petition to let Facebook know that we won’t let up until takes a firm policy against sexually violent hate speech: