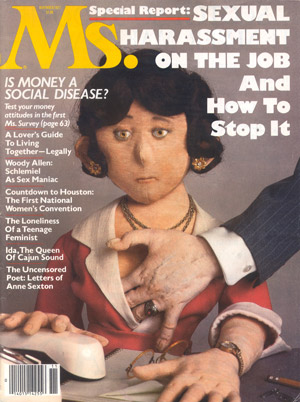 Herman Cain’s campaign has raked in donations even after a handful of damning sexual harassment allegations have surfaced. Penn State students rallied and rioted on behalf of their coach, even after it was revealed that he failed to report a witnessed child rape to the police.

Our rape culture, our misunderstanding of the way assault and harassment demean and hurt victims, is worse than ever. Denial is running rampant.

You’d think our national op-ed pages would rush to publish feminist-minded pieces by victim’s advocates, arguing that we take sexual assault and harassment more seriously, that we update our attitudes to reflect our laws, and update those laws, too, if needed.

What we got instead, in The New York Times, was a column by professional antifeminist Katie Roiphe, with the essential message that sexual harassment is just ladies who can’t take a joke. The headline is, “In Favor of Dirty Jokes and Risqué Remarks,” and the URL spells out “Sexual Harassment? What on Earth is That?”

I knew that ’90s nostalgia was in style again, but I didn’t expect this type of Anita Hill-era retread.

These kinds of contrarian arguments—so popular at The New York Times and like publications—are dangerous. They get swallowed up and absorbed by the mainstream culture and become used as weapons, allowing people who should know better to dismiss those who raise legitimate concerns about rape and harassment and abuse of power as “no fun,” “man-hating” and “anti-sex.” This stereotype, as anyone who has seen or heard about a SlutWalk (or talked to most self-identified feminists in the last 50 years) can tell you, is simply not true.

You get the idea. Insert feminist idea and expect a knee-jerk Roiphe retort, one filled with allusions to her own delightful rapport with the male gender, unlike those other feminists who are always killing the buzz with complaints like “rape is bad.”

This weekend, in the classic Roiphe vein, she writes, essentially, that sexual harassment laws mean that dirty jokes have been criminalized, no one can have any fun at work and the long arm of the law now prohibits flirty, bold women (presumably like herself) from parrying innuendo for innuendo. Instead, in a world as bleak as 1984‘s dystopia, all would-be wits must become silent desk-drones lest they and their repartee-partners be hauled off and booked at their local precinct.

Except that’s not what sexual harassment is. It’s not about conversation, but about abuse of authority or privilege.

Ask nearly any woman who worked in an office environment before those laws Roiphe decries came into effect and they will tell you that it wasn’t very much fun, and it wasn’t mutual—each day was a gauntlet, in fact. At the Daily Beast, Leslie Bennetts explains why what Herman Cain is accused of doing was wrong, and why it should be taken seriously:

Sexual harassment is about the lust for sexual gratification, obviously, but it’s also about power. When a man in a position of authority pressures a woman to service him sexually even if she doesn’t want to, and her ability to refuse is compromised by … her dependent status, the man is committing an egregious abuse of power. For him, that’s a large part of the point: he’s demonstrating his dominance and demanding that the woman acknowledge her subservience.

Beyond the sort of quid pro quo (or implied quid pro quo) behavior Bennetts describes, there’s the notion of a hostile environment. Roiphe makes the ignorant assumption that all ribald or sexual chatter in the office is an actionable offense (it also assumes that most people are dying to talk dirty at work, but that is another story) and that office environments are dominated by prudes who yell “see you in court!” when they hear any reference they deem impure.

In reality, a hostile environment is described as a repeated and protracted problem that is ignored or not addressed. Amanda Marcotte wrote a rebuttal of Roiphe, noting her utter misunderstanding of this basic legal and workplace concept:

Roiphe is, without a shred of evidence, claiming that sexual harassment complaints and lawsuits are generally about a single comment or quickly dispatched advance. In reality, for something to rise to the level of sexual harassment, it has to be a ‘hostile work environment,’ aka persistent abuse. No one is getting [sued] for one day saying something a little off-color, and it’s intellectually dishonest for her to suggest otherwise.

Marcotte also notes that the vagueness of words like “hostile” and “uncomfortable” are there not to be able to qualify everything off-color as sexual harassment, but to allow people to discern the difference:

As the Clarence Thomas situation showed, sexual harassers are endlessly inventive with their euphemisms or gestures. If anything, they deliberately act as weird as possible in an act that is so common that psychologists have a name for it: gaslighting, i.e. acting strange to disorient the victim so that she doubts herself. … Thus, the language of ‘uncomfortable’ and ‘hostile’ is good language, since a reasonable person can see that putting a pubic hair on a Coke can is a hostile gesture designed to make the victim uncomfortable.

Real sexual harassment happens. That it happens less than it once did is because as a society, we’ve legislated against it, actively discussed it, and attempted, however ambiguously, to define it. That gives smart, competent young women the ability to whack their colleagues upside the head (harassment!) and say, as I once did to a friend: Dude, you just cannot forward that joke to everyone on your team.

Indeed, the existence of those laws and discussions has empowered women to be able to speak up when they feel a colleague is nudging a line—and often in a friendly way, without resorting to suing.

One advantage of this column is that it’s brought out Roiphe’s opponents’ wit. Jezebel’s Erin Gloria Ryan mocks Roiphe by taking her rhetoric to the extreme:

If we simply laughed and acted charmed when men did stuff like speculate on our cup sizes in front of each other, there would be so many more female CEOs right now. … It is truly an outrage that so many men have been put to death for telling women in the elevator that they’re pretty.

Exactly. The idea that there’s some sort of office-to-courtroom pipeline for everyday encounters is risible.

Sexual harassment is a genuine bar to equality, and the onslaught of denial in both the Herman Cain situation and, even worse, the Penn State rape coverup scandal, shows that we need to talk about these dynamics in the places we work and play seriously.

In the Nation, Dave Zirin has a chilling series of anecdotes about the denial of rape culture that took place under Penn State’s Joe Paterno.

In 2003, less than one year after Paterno was told that Sandusky was raping children, he allowed a player accused of rape to suit up and play in a bowl game. Widespread criticism of this move was ignored. In 2006, Penn State’s Orange Bowl opponent Florida State, sent home linebacker A.J. Nicholson, after accusations of sexual assault. Paterno’s response, in light of recent events, is jaw-dropping. He said, ‘There’s so many people gravitating to these kids. He may not have even known what he was getting into, Nicholson. They knock on the door; somebody may knock on the door; a cute girl knocks on the door. What do you do? Geez. I hope—thank God they don’t knock on my door because I’d refer them to a couple of other rooms.’ [The local branch of NOW] called for Paterno’s resignation and short of that, asked to dialogue with Paterno and the team. Neither Paterno nor anyone in the power at Penn State accepted the invitation.

Paterno’s comments are the kind of flip, obnoxious, victim-blaming that oils the wheels of a much more insidious rape culture. And so, while it’s necessary to make fun of Roiphe’s reactionary writing, it’s also important to remember that the culture she aids and abets is neither witty, ribald nor clever. It’s tragic.

Excerpted with permission from AlterNet. Read the full version here.

Abortion Access: If There’s Political Will, There’s A Way
America’s Lack of Paid Leave Is Devastating Women and Families
Jacinda Ardern Showed the Power of Women’s Leadership—And the Urgent Need for More