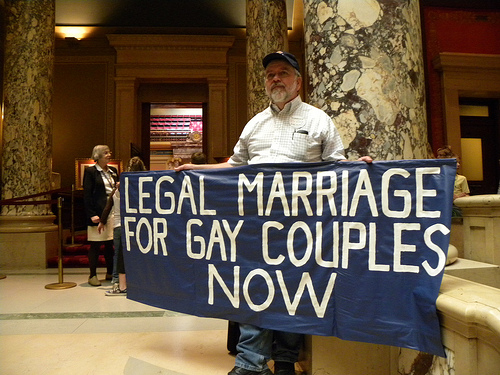 It’s been 470 days since Judge Vaughn Walker ruled that Proposition 8, the California constitutional ban on same-sex marriage, is unconstitutional. But rather than immediately restore legal same-sex marriages, the decision has remained in legal limbo due to an appeal by the marriage ban’s proponents. And here’s the latest: Today the California Supreme Court ruled that those proponents do have standing to appeal Walker’s ruling—something the Ninth Circuit Court of Appeals asked them to rule on before moving ahead with the appeals process.

Prop 8 trial watchers have been waiting almost a year for the ruling, but if you haven’t been paying close attention you’ll no doubt be confused about what this decision means. Basically, it just means that the Prop 8 ball is back in the hands of the Ninth Circuit Court.

On December 6, 2010, those judges heard testimony from both sides in the case (Prop 8 Trial Tracker live-blogged the hearing here), and afterwards the Ninth Circuit decided to look closely into the matter of standing. At issue is whether the proponents of Prop 8 could appeal Judge Walker’s decision, because the named defendant in the Prop 8 case—the governor of California—refused to defend the marriage ban. Judge Walker allowed them to do so, but the Ninth Circuit Court sent it back to the Supremes. Now the appeals court may either go along with the California Supreme Court ruling or reject its finding. Either way, the American Foundation for Equal Rights, the team that has been fighting the gay marriage ban, say that they expect a decision on the Prop 8 appeal soon.

As we’ve noted on the Ms. Blog, time is of the essence in this case, since many couples have put their lives and marriage plans on hold as they await a decision. In cases where partners are elderly or ill, the clock may run out for legal marriage before Judge Walker’s historic decision gets upheld. In the best-case scenario, the Ninth Circuit will overturn Prop 8, and same-sex couples will be free again to marry in the state of California. Also, if the Ninth Circuit decides that the proponents of Prop 8 do not have standing, then Judge Walker’s ruling will go into effect.

Kate Kendell, of the National Center for Lesbian Rights, explains why today’s ruling is both bad and good news:

We disagree profoundly with the California Supreme Court’s holding that a handful of unelected initiative sponsors have the power to represent the interests of the entire public and to override the decisions of the state’s elected executive officers. Nonetheless, we are relieved that the case is once again moving forward and the Ninth Circuit will now address whether the initiative proponents can continue this appeal and, if so, whether Prop 8 is constitutional. We hope the Ninth Circuit will issue its decision soon and hasten the day when this damaging law is off the books. Every day that goes by, same-sex couples in California are being denied not only the basic right to marry, but the right to be treated with equal dignity and respect. Same-sex couples in California have lived under the shadow of this unfair law for far too long.

Stay tuned for more updates on this historic case.