For Fans of Ntozake Shange, Finally, A Memoir - Ms. Magazine
Skip to content 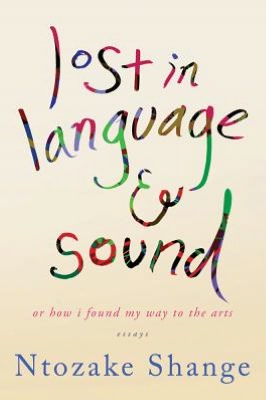 Ntozake Shange, feminist author of the critically acclaimed choreopoem for colored girls who’ve considered suicide/ when the rainbow is enuf, as well as numerous poetry collections and novels (most recently the 600-page Some Sing, Some Cry, co-written with her sister Ifa Bayeza), gets personal, political and lyrical in her latest work, Lost in Language and Sound: A Memoir of Coming to the Arts. The previously unpublished essays and poems ground the author’s love of language in a world of sound and movement, one shaped by her jazz- and poetry-enthusiast parents and by the melodious accents that were the soundtracks of the New Jersey and St. Louis neighborhoods she grew up in.

The seamless fusion of sound and poetry that has captivated fans of for colored girls for over 30 years is historicized in the slim collection. To be sure, some readers may find the book’s free-floating form and structure less than inviting. The three-part division by theme–into drama, poetry, and lyricism; then movement; and finally, feeling–would benefit from dates or other contextual markers to anchor the accounts.

But those looking for a window into Shange will find much to rivet them. In addition to recounting the origins of her famous choreopoem-turned-stage play, Shange considers black aesthetics more broadly. She challenges the long-held dictum that black artists must first be propagandists:

we assume a musical solo is a personal statement/ we think the poet is speakin for the world/ there’s something wrong there, a writer’s first commitment is to the piece itself. how the words fall & leap/ or if they dawdle & sit down fannin themselves. writers are dealing with language, not politics. that comes later.

And politics do come into Shange’s reveries, such as the arresting prose poem, “my pen is a machete.” In it, Shange recalls her impulse to “deform n maim” the English language, “the language that I waz taught to hate myself in/ the language that perpetuates the notions that cause pain to every black child as s/he learns to speak of the world and the ‘self.’” Indeed, Shange’s entire oeuvre has used unique script and turns of phrase as weapons against a sexist and racist literary tradition. Her pen has served her well as an instrument for exorcising anger and grief, among other emotions.

Shange lays bare these politicized emotions in the last section of her memoir, where she takes on her bouts of depression, stints in therapy, the loss of her father, the memory of her mother’s laughter, the “allure of silk” and the sting and pleasure of heterosexual love. The final section is perhaps the most potent in this schizophrenic assemblage of song, rant and cry, as it offers rare insight into the feelings of an artist who has shielded her inner workings from the public eye. “It’s not that I’m a recluse, it’s that my intimates are words & notes,” write Shange in the prologue. Given that, this memoir of language and sound is truly a sharing of intimacies.

The new issue of Ms. contains an exclusive first look at “letter to a young poet,” an original poem from Lost in Language and Sound. Pick up the issue on newsstands, or join Ms. to have it delivered to your door!