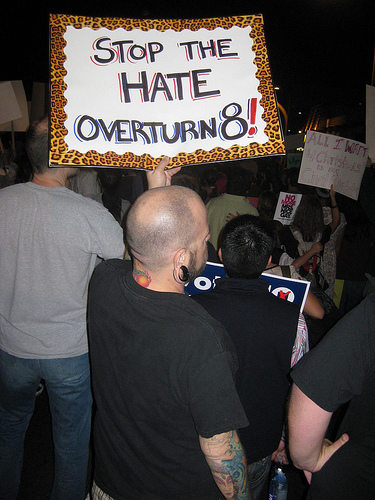 California’s gay marriage ban, Prop 8, was back in court this week for what is likely to be the last of the many appeals hearings. The Ninth Circuit Court of Appeals weighed two matters: First, whether the video tapes of the trial’s proceedings could be made public (Prop 8 supporters want them deep-sixed) and second, whether Judge Walker was biased because he is in a long-term same-sex relationship (Prop 8 supporters say yes).

Since the decision on the tapes won’t affect the outcome of the trial–although it might set important precedent about courtroom transparency–and it seems virtually impossible that the Ninth Circuit will throw out the case because Judge Walker is gay, the next big news expected out of the Ninth Circuit is the upholding of Judge Walker’s decision that California’s gay marriage ban is unconstitutional. That would be a huge victory for marriage equality.

Over the course of the trial, proponents of the marriage ban have had to show all their cards. What we’ve learned is that there are no legally defensible arguments against same-sex marriage, just outdated mumbo-jumbo about the roles of women and men within marriage. With the final ruling potentially just weeks or days away, we’re in a good position to take stock of what the trial has taught us.

LESSON ONE: UGLY CAMPAIGN TACTICS MAY WIN OVER VOTERS, BUT THEY DON’T HOLD UP IN COURT. We’ve all heard the Prop 8 campaign rhetoric. Phrases such as “protect marriage” and “defense of marriage” were  bandied about. Anti-gay-marriage ads play scary music while voice-overs bespeak the dangers of teaching children that gay marriage is okay. But when the Prop 8 proponents went to court, they made no such claims about the evils of homosexuality. And ultimately, Judge Walker took a stand against the bigotry and intolerance of the campaigns. “Moral disapproval alone,” he wrote in his decision, “is an improper basis on which to deny rights to gay men and lesbians.”

LESSON TWO: OPPONENTS OF SAME-SEX MARRIAGE ALSO WANT TO CONTROL STRAIGHT MARRIAGES. As I wrote in 2010, when Prop 8 supporters talk about “traditional marriage” between a man and a woman and fret that marriage equality will “redefine” the institution, they are making a coded case for women’s subordination to men. Disagreeing with this view, Judge Walker ruled that marriage has evolved over time in this country and has been “transformed from a male-dominated institution into an institution recognizing men and women as equals.” He noted that it is not the state’s role to prescribe gender roles within marriage: “Gender no longer forms an essential part of marriage; marriage under law is a union of equals.”

This lesson illustrates why straight people need to be paying close attention to the marriage equality debates. Most Americans don’t want the state telling them how to organize their home lives. When the Prop 8 defenders repeatedly argued in court that the state has an interest in ensuring that children will be born only to heterosexual couples joined in wedlock, they made it clear that they’re not just talking gay marriage. By their logic, the state could impose severe penalties on couples or individuals who procreate outside of marriage. Straight couples could be subject to mandatory fertility testing before being issued a marriage license. Single mothers could be forced to marry the fathers of their children.

Legalizing same-sex marriage, then, won’t just benefit gay couples; it will cement feminist reforms of the institution of marriage and ensure American citizens’ rights to sovereignty within their own households.

LESSON THREE: TIME IS ON MARRIAGE EQUALITY’S SIDE, BUT DELAYS ARE COSTLY. Sixteen long months have passed since Judge Walker concluded his decision. As appeals drag on, the delay has deep costs for Californians such as Derence Kernek, who wanted to marry his partner of over 40 years, Ed Watson. Earlier this year, he and Ed made an appeal of their own to the courts to come to a speedy decision, citing Ed’s Alzheimer’s disease as a factor that added urgency to their desire for marriage. Sadly, Ed passed away this week.

Gay marriage’s legalization is increasingly seen as a matter not of whether, but of when. Looking ahead, The New Yorker has listed the overturn of Prop 8 as one of the likely “Top Five Legal Stories of 2012” and noted that once gay marriage is legal in California, “the pace of change may accelerate.” Earlier this week, Hillary Clinton received a standing ovation when she took a strong stand in favor of LGBT rights in her address to the United Nations in recognition of International Human Rights Day. In this speech she drew a line in the sand, stating emphatically, “Gay rights are human rights, and human rights are gay rights.” Secretary of State Clinton’s remarks indicate the extent to which the Obama administration’s views on gay rights have evolved.

Kate Kendell, Executive Director of the National Center for Lesbian Rights, is optimistic:

After this week it is clear where we are headed. This country and the world can no longer discriminate against and stigmatize gay people. Keeping us out of marriage and other institutions that everyone else has access to is becoming utterly untenable.

As we await the Ninth Circuit Court’s imminent decision, let’s find inspiration in Hillary Clinton’s words, “Those who advocate for expanding the circle of human rights were and are on the right side of history.”

Hillary Clinton on Iran, Abortion and the 2022 Midterms