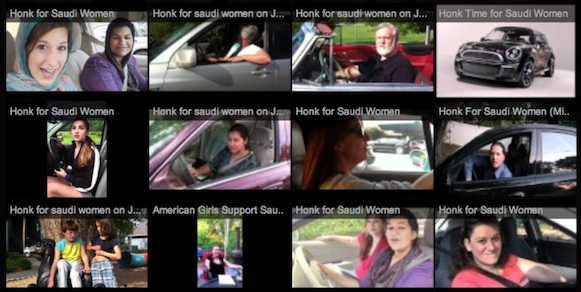 Today is International Human Rights Day, and this year there is much to celebrate. 2011 has been an extraordinary year for human rights activism worldwide, as the UN points out:

This year, millions of people decided the time had come to claim their rights. They took to the streets and demanded change. Many found their voices using the internet and instant messaging to inform, inspire and mobilize supporters to seek their basic human rights. Social media helped activists organize peaceful protest movements in cities across the globe – from Tunis to Madrid, from Cairo to New York – at times in the face of violent repression.

One example of the kind of revolutionary activism that’s been making headlines all year is Saudi women’s struggle for the right to drive. At the forefront of the Women2Drive movement is Manal al-Sharif, who was arrested in May for posting a video of herself driving on YouTube. She was later released—on the condition that she quit the campaign.

In spite of this, al-Sharif is back behind the wheel. In honor of International Human Rights Day, she’s taken to YouTube again to share her message that “mobility is a basic human right.” Al-Sharif honks for women’s driving rights in Saudi Arabia and asks you to do the same:

Dozens of people have joined the “Honk for Saudi Women” campaign by submitting their own videos. Here are a few of our favorites:

You can celebrate International Human Rights Day by participating in the campaign! Say you support Saudi women’s driving rights, honk, upload the video to YouTube, and send the link to honkforsaudiwomen@gmail.com. Your video will join others from supporters worldwide on the channel http://www.youtube.com/honkforsaudiwomen.