"Young Adult" Breaks All the Rules for Women in Film - Ms. Magazine
Skip to content 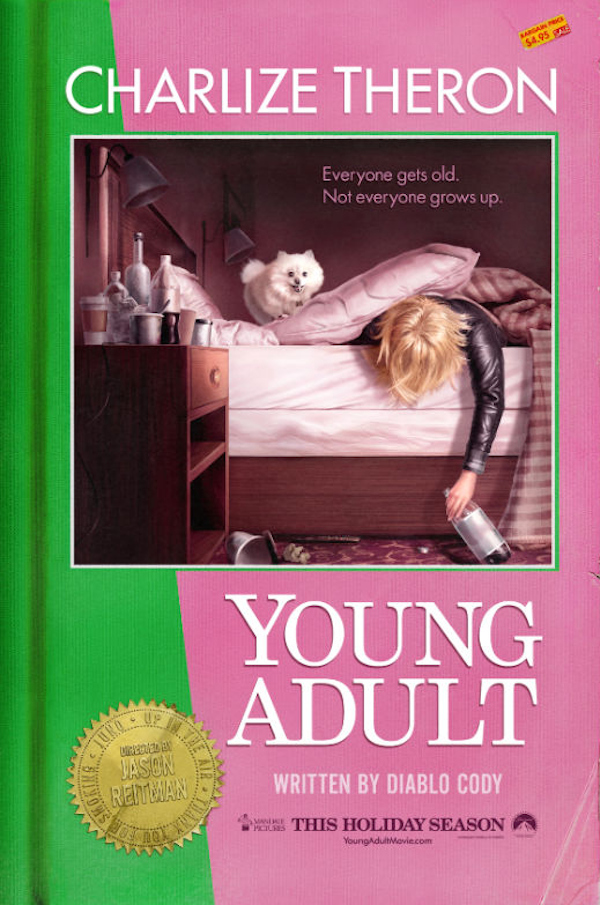 I love seeing disgusting women on the big screen. Every time we have an incorrect, impolite or flat-out mean woman as a protagonist, the angelic female figure of our cultural imagination loses her wings. Onscreen, leading men are often allowed to be ugly in spirit and action, (think Greenberg, Curb Your Enthusiasm), but there are very few ethically repulsive leading women. Yet in Diablo Cody’s new film Young Adult, we have that rare thing: a woman protagonist who is a true piece of work.

In her private moments, young-adult-fiction writer Mavis Gary (Charlize Theron) is a deflated sad sack holding off failure with booze and memories. On top of that, she is an ethical mess, hellbent on stealing her ex-boyfriend away from his happy home and newborn child.

Cody (writer of Juno) knew exactly what she was risking with such a lead, as she told feminist blog Women and Hollywood:

The conventional knowledge in Hollywood is that an unsympathetic female character can tank a movie. I’m hoping that’s not true. I’m knocking on wood really emphatically right now but honestly I have a lot of theories sometimes I wonder if it comes down to mommy issues. The idea of a cold, unlikeable woman or a woman who is not in control of herself is genuinely frightening to people because it threatens civilization itself or threatens the American family. But I don’t know why people are always willing to accept and even like flawed male characters.We’ve seen so many lovable anti-heroes who are curmudgeons or addicts or bad fathers and a lot of those characters have become beloved icons and I don’t see women allowed to play the same parts. So it was really important to me to try and turn that around.

In one way, Mavis is a pre-packaged trope, ready for film: the rich, popular bitch. But her character is expanded well beyond the flatness of many filmic female roles. Mavis’s life is full of extremely recognizable clutter and delusion. Her web browser is stuffed with open tabs about avoided emails and undone work. Relatable, too, is the complexity of her beautiful mask. Great pains are taken to catalogue the immense effort she puts into her appearance; we see piles of wigs, loads of cosmetics and plenty of dissatisfaction. I’m not sure I’ve ever seen a more violent portrayal of a manicure.

Throughout, the film serves as a brilliant indictment of pop culture narratives of success and consumption, underscored by its reality TV soundtrack. The films opens with the sobs of real-life reality star Kendra Wilkinson–weeping about not feeling beautiful–played in the background as Mavis lies passed out in her mildly luxurious and severely dirty apartment. Everything in Mavis’s world is covered with a patina of filth. In a wonderful touch, even the mouse pad of her white laptop is smudged, as are her car stereo buttons. The emphasis on physical disarray marries nicely with all those Kardashians. Reality TV sells luxury, and yet the homes it portrays are as cluttered with fast-food cups and loose mail as anyone else’s. The movie revels in pointing out, again and again, the lack of glamor in the lives of those selling us their own glamorous narratives.

The film is full of abject images, especially body fluids: spit, oozing wounds, breast milk, clipped cuticles. And the mundanity of those fluids grounds Mavis, saving her from man-stealer cliches like Glenn Close’s character in Fatal Attraction (though the two share similar goals, if different means). The women who appear as “ideal” in Young Adult aren’t fembots, accomplished at the feminine tricks that Mavis is drowning in. Instead, they are comfortable in their lives and bodies, however unfashionable those might be.

There are some other refreshing inversions in the movie: The babysitter is a man; the rock band is a group of moms; disability is treated with a wild disregard for sentimentality; the one sex scene has (gasp!) unflattering lighting.

Young Adult is about the tension between performance and reality in American life. While Mavis is victim to her own myth-making, it is a great relief to see a film like Young Adult pick that cultural wound without making our protagonist into a heroine or a monster. She is a mess. Hallelujah.