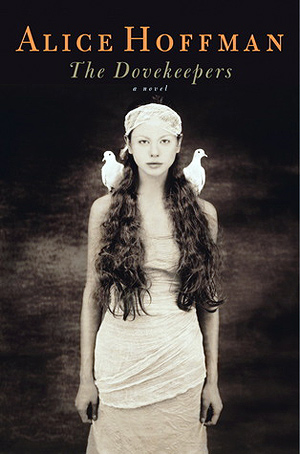 The Fall of Masada is one of the most incredible real-life David-and-Goliath stories ever recorded. After the Roman sacking of Jerusalem in the year 70, about 900 Jews took refuge in the Masada, a fortress on an isolated desert plateau. There they held off a Roman legion of 10,000 before committing mass suicide. Of the Jews, only two women and five children survived to tell the tale to the Jewish historian Josephus.

It’s fitting, then, that Alice Hoffman retells the siege of Masada from women’s point of view. She flips the script to create four heroines of proportions just as mythic as those of Josephus’ male military heroes. Yael, Revka, Aziza and Shirah are brave, resourceful, beautiful and, presumably, doomed. The prolific Hoffman is known for her slim, mystical and steamy novels about women (Practical Magic, The Red Garden), and while The Dovekeepers is a hefty 501 pages, it is otherwise no exception, chock full of Judaic divine-feminine mysticism and plenty of sex.

In Hoffman’s ancient world, love is always at first sight (fair enough, given the cloistering of women), and the sex is always good. So good, in fact, that lust is the downfall of several of her women. This may strike some feminists as slut-shaming, but it’s plausible given first-century punishments for adulterous Jewish women. (Remember what prompted, “He that is without sin among you, let him cast the first stone”!) These were brutal times, and, in Hoffman’s hands, love and desire are just more of the cruel forces that buffet the characters, along with the harsh desert and the inexorable Roman soldiers. Magic and wild feats of archery aside, Yael et al. are most heroic in their refusal to succumb to trauma.

Vivid and visual, The Dovekeepers would be enjoyable simply as a travelogue, a Birthright trip to ancient Israel by time machine. Character backstories take us throughout the region, from the hills of Moab to Alexandria to Essene villages along the Dead Sea. Hoffman’s novel is the fruit of five years of research, some conducted as a visiting scholar at the Women’s Studies Research Center at Brandeis University, and her work pays off in rich but never labored historical detail. She supplies unobtrusive answers to questions of how 900 people survived atop a desert mesa. How did they grow food, for example? By using dove droppings as fertilizer—hence the dovecote, where our heroines work. I leave it to experts to quibble, because I wasn’t able to catch Hoffman in a single anachronism. For instance, not only were dovecotes common across the Mediterranean, but one still stands at Masada.

Intricately crafted, replete with the foreshadowing and symbolism of classic myth, The Dovekeepers will join Marion Zimmer Bradley’s The Mists of Avalon as one of the great feminist re-imaginings of war epics. Non-fans of fantasy may have a bit of trouble with the romantic indulgences—a devastatingly beautiful witch, a girl with uncanny aim who disguises herself as a boy—but these serve to leaven an otherwise grim tale.