Women Will Storm the 2012 Ballot Boxes to Defend Their Health and Economic Rights - Ms. Magazine
Skip to content 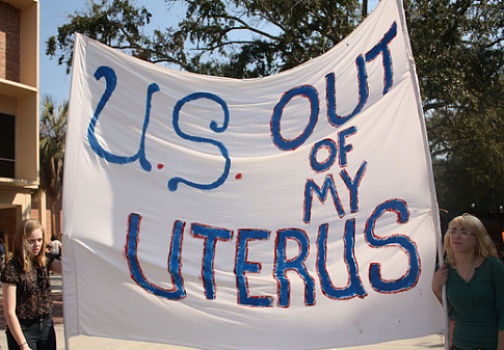 “We’re here to express the outrage of literally millions of American women,” announced Feminist Majority president, Ms. publisher and long-time activist Eleanor Smeal at the National Press Club in Washington yesterday. That outrage is being channeled into a massive get-out-the-vote (GOTV) mobilization of women. Organized by a coalition of more than 50 women’s groups under the banner HERvotes, the campaign represents a broad swath of women of all ages rallying around the issues of Health and Economic Rights.

Of course, with state legislatures trying to force women who choose abortion to have vaginal ultrasounds and the House leadership hosting all-male panels on women’s health, organizing women may never have been easier. As Terry O’Neill, president of the National Organization for Women, pointed out, women have hardly been sitting around waiting to be organized. Protests are spontaneously erupting around the country. In Oklahoma, for example, not exactly known as a bastion of feminism, hundreds of women showed up at the statehouse on February 29 to protest a bill that would define “personhood” at conception.

Even the right to vote is coming under assault, as efforts to require identification gain ground. Voter ID requirements could prevent as many as 32 million women from voting, Audelo said, citing HERvotes statistics, including young and old, low-income, and recently divorced, among others.

The speakers were flanked by two graphics that captured both the anger and the promise the elections hold. One was a blown-up photo of the much-lampooned congressional hearing at which only men were allowed to speak on whether the Affordable Care Act should mandate coverage of contraception. The other was a graph showing the gender gap in voting over the last half-century, with women outvoting men in every election since 1964 [PDF]. In 1980, women began voting more Democratic, a trend that continues. These trends, speakers suggested, are driving recent voter suppression efforts.

Women’s right to vote is one of a dozen advances that HERvotes says are at now at risk. Others include workforce gains for women, insurance coverage for women’s health care, assistance programs for low-income women and families, the Violence Against Women Act and even legal birth control.

Avis Jones-DeWeever, executive director of the National Council of Negro Women, called for economic justice and protecting women’s ability to put food on the table and “the freedom to stay home with a sick child or an ailing parent without fear of losing our livelihood.” She decried a situation in which home health and domestic workers are not guaranteed minimum wage even as Hollywood makes millions off “movies about servitude”–a none-too-veiled swipe at “The Help.”

The American Association of University Women pledged $1.5 million to the GOTV effort and will target 15 states for the Action Fund Voting Campaign.“We’re gearing up like never before,” said Lisa Maatz, AAUW director of public policy and government relations. “There’s a palpable buzz. Women are fed up.”

Maatz added that electing more women, with our superior communication skills, would help break through the partisan gridlock on Capitol Hill.

Indeed, women hold a pitiful 17 percent of congressional seats in the U.S. According to the nonpartisan Women’s Campaign Fund, the U.S. ranks an astonishing 90th globally in the percentage of women in national legislatures–trailing well behind such countries as Uganda and Afghanistan. (But we beat Saudi Arabia!)

The press conference ended with organization leaders heading to Capitol Hill to lobby against the Blunt amendment. The measure (an amendment to the highway bill, of all things) would have opened up an enormous loophole, allowing employers to opt out of the Affordable Care Act for any “moral” objection, not only contraception. A few hours later the amendment was narrowly defeated. Score one for the team.

Beth Baker is a long-time freelance writer in the Washington, D.C. area and author most recently of Old Age in a New Age (Vanderbilt University Press 2007).