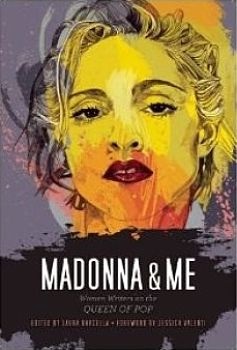 As female pop icons go, perhaps no one has inspired the amount of written reflection, academic and personal, as Madonna Ciccone. Still to-the-minute relevant at 53, she recently starred in her own Super Bowl halftime extravaganza and will be embarking on a world tour for her latest album. And the latest addition to the what-I-think-of-Madonna oeuvre has arrived, Madonna & Me: Women Writers on the Queen of Pop, edited by Laura Barcella.

A collection of 40 smart, witty and sometimes revelatory essays, the book takes for granted the idea that Madonna has had a profound effect on all of our lives, not just those of the contributors. Madonna brought a bravery and brashness to the pop performance landscape that had not quite been seen before, and thus served as an exemplar for others, no matter what their metier. Several writers in the book thank the singer for inspiring them to be who they really wanted to be, dubbing her a “living permission slip.”

Many of the contributors give the no-holds-barred Madonna a nod for aiding their sexual liberation. Noting her 1980s rise to fame, Emily Nussbaum writes, Madonna “was our sacrificial anti-victim, jumping into the slut-pit before she could be thrown…”

Madonna’s liberatory message also reached home for Soniah Kamal, whose piece “Into the Wilderness” reveals how, as a young Pakistani girl, she began learning  what “sexy” means through Madonna songs and videos. Squished between Madonna and strict Muslim parents, Kamal had to justify the desire to be desirable.

Madonna knocked down racial barriers for some of these writers as well. As Tamara Lynch declares in “Madonna Is Down With the Swirl,” “I didn’t have to live by anyone’s rules but my own. It was time to be whoever I wanted, with whoever I wanted. I didn’t need to be black or white. I just needed to be me.”

Madonna’s early rape is mentioned (a little remembered fact about her New York City beginnings), but Nussbaum notes that the singer somehow crushed the personal violation into part of her overwhelming self-empowerment. Nussbaum also writes that while her only peer–the so-called King of Pop, Michael Jackson–maintained for many years a public persona of tenderness and vulnerability, the Queen’s image was pure strength. Never taking a victim’s stance in her songs, performances or personal life, if she was being submissive it was because she was letting you dominate. If Madonna ever doubted herself, she never showed it.

And if Madonna could reinvent herself–perpetually–then so could the young women who admired her. A surprising essay by Bee Lavender tells how the author covered her scars as a young cancer victim, revealing only what she wanted people to see. She writes: “I knew I was ugly. … The surface is indeed superficial, but it matters.” Her piece is a touching take on personal brand management,  learned from the best shape-shifter pop culture has ever known.

In possibly the most charming story of the collection, Wendy Shanker suggests that what Madonna really needs is a nice Jewish boy, so she sets up a profile for Madonna on J-Date using Madge’s real-life stats. Perhaps Madonna could find true love with an older man who will take care of her, suggests Shanker the Matchmaker, but then again Madonna can take care of herself–and then some.

Of course, not all the writers in the book are complete fans. Some characterize Madonna as the Alpha-Diva, others rag on her plastic surgery. Her acting failures, her incarnation as an English mother who writes children’s books, her contradictory whore/virgin persona, her young lovers–all are held against her.

Madonna was never your friend–more like bullying older sister whose moral character you questioned and whose opinions you despised for being too cynical–but who was always right. … She still always wins, but it hurts, and it isn’t fun anymore. She has the heavyweight championship belt, the throne and an expansive kingdom with no king.

Madonna continues to push us. To be sexier? Maybe. To be stronger? Likely. Out of conventional ways of thinking? Definitely. Madonna’s story really does begin and end on a dance floor. A place where, she told us, if all else failed in life, we could get away to. And if dancing is a metaphor for the pop star’s life, Wilson sums it up well: “Her moves weren’t difficult, but there were millions of them…”

Photo is the cover of the book Madonna and Me: Women Writers on the Queen of Pop.