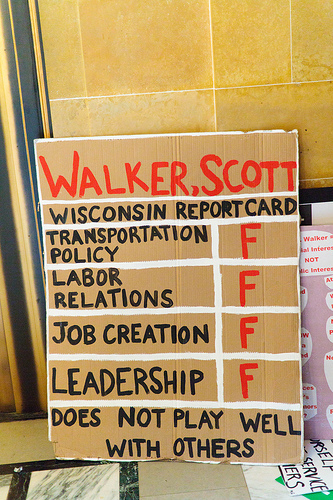 It might seem a bad time to repeal equal pay laws when women who graduate college earn $1.2 million less during their lifetimes than their male peers. It might also seem ill-conceived to replace effective sex education with abstinence-only programs while making abortion restrictions tighter.

But Wisconsin Gov. Scott Walker has never been a master of timing.

For nearly a year, half of Wisconsin has been up in arms over Walker’s repeal of union rights, which the state Supreme Court upheld last June. Gov. Walker may have sealed his claim to infamy, however, when he sneakily passed 51 laws last Thursday, four of which target women. He waited until Friday, hours before the Easter weekend began, to make his public announcement—a way to sidestep the inevitable outcry.

The law causing the real uproar, however, might just be the most surprising blow to women dealt by any state government in 2012. Gov. Walker turned back the clock on gender equality in the workforce by repealing Wisconsin’s 2009 Equal Pay Enforcement Act (EPEA), which permitted victims of wage discrimination to take their cases to state circuit courts. The law not only protected women from pay discrimination, but also from sexual harassment in the workplace.

Although President Obama has put an anti-wage discrimination law—the Lilly Ledbetter Fair Pay Act of 2009—in place, Gov. Walker’s repeal of EPEA will probably make it harder for Wisconsin women to pay their bills. Before the EPEA’s passage in 2009, Wisconsin came 37th in the list of national wage gaps, with an average gap of $11,201 between men and women’s annual earnings, according to the National Partnership for Women and Families. At the time, Wisconsin women earned 75 cents for every dollar a man was paid–2 cents lower than the national average of 77. Since the EPEA passed, the earnings of women in Wisconsin has increased by three percent, to 78 cents on the dollar. No new lawsuits were filed during the two-year period in which the EPEA was in effect, so it’s likely the mere threat of EPEA lawsuits prompted employers to increase women’s wages. With the law gone, that progress may well reverse.

Considering that 40 percent of Wisconsin women are co-breadwinners for their families—and nearly 30 percent are primary breadwinners—women’s wages falling would be a significant financial blow for thousands of households in the state. Forty percent of the state’s women-headed households already live below the national poverty line, one of the highest poverty levels for women in the Midwest.

While it’s sad that eliminating the gender wage gap is elusive, it’s sadder still that only through the threat of lawsuits will companies increase the wages of their women employees. Since 1963, the national gender wage gap has increased a mere half-cent per year. It had its biggest boom between 1980 and 1990, and slowed down between 2000 and 2009. A bill designed to further close the wage gap, the Paycheck Fairness Act, has stalled in Congress.

Yet despite the unmistakable wage gaps persisting in each state, many (male) pundits argue that gender discrimination in the workplace is a myth. In a recent Daily Beast article Sen. Glenn Grothman (R-WI), a supporter of the EPEA repeal, stated:

But Sen. Grothman didn’t stop there, adding that “money is more important to men,” and young men out of college are more “money-conscious” because they expect to someday be the primary breadwinners. Although this model never applied to most lower-class families, who have always relied on dual incomes, and is increasingly obsolete due to the steady rise of women-headed households, it does bring about a sort of chicken-or-the-egg question. Is there a lack of equal pay because women leave the workforce to rear children, or do women tend to be the ones to take time off for child-rearing because they earn lower wages?

There’s a direct correlation between equal pay, health-care and reproductive rights. If a woman can afford health care and has access to birth control, then she will be able to either time her child-rearing (or forgo it if she chooses) to accommodate her career. As it stands now, women who make significantly less than their male colleagues–and who, with the Affordable Care Act in question, must pay more for health care–have less control over their reproductive futures, their careers and ultimately, their lives.

Conservatives such as Scott Walker maintain they are trying to lessen women’s dependency on the state, but between the repeal of equal pay laws, the tightening of abortion restrictions and the hefty gender-biased health insurance premiums, it is obvious they do want women to be dependent on someone—a man.