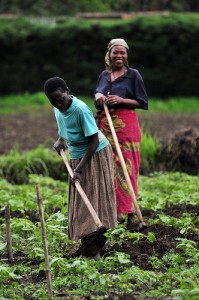 What is the connection between greenhouse gas emissions and gender inequality? Women. A new report released in late March says women are invaluable when it comes to impacting climate change.

Sociologists Christina Ergas and Richard York from the University of Oregon conducted a study which found that countries with more women in political decision-making positions see a reduction in the nation’s carbon dioxide emissions–considered to be the cause of human-induced global climate change.

Ergas and York cite different reasons for the study’s conclusion, including the fact that women are larger participants than men in the green movement–they make up 60 to 80 percent of environmental activists–and that they make different policy decisions than men. Perhaps most importantly, women have more at stake when it comes to climate change because the livelihood of rural women in many countries depends largely on environmental well-being.

The effects of global climate change–such as droughts, floods and crop failures–have serious repercussions for women farmers across the globe. And there are plenty of farming women: The 2012 U.N. Commission on the Status of Women Report noted that they make up 43 percent of the agricultural labor force in developing countries. In Bangladesh, for example, the number of women farmers has been steadily rising for the past decade and as of 2011, women made up nearly half of the agricultural force due to male labor migration. Women in China account for 41 percent of agricultural workers, and special trainings have been conducted to teach Chinese women about new water-saving irrigation technology.

The region with one of the highest numbers of women in agriculture is Sub-Saharan Africa, where women make up 60 to 80 percent of the farming labor force. In Tanzania alone, 98 percent of the rural women who contribute economically are farmers.

Whether out of necessity or choice, women affected by climate change in rural regions take on more social and economic responsibility as crop producers. But while organizations such as U.N. Women and USAID are recognizing and supporting women farmers through environmental technology training, funding and policy recommendations to their local governments, many rural farm women still lack access to land rights and farming subsidies. They also face the burden of unequal pay for doing the same job as their male counterparts, and suffer from various health problems (including exhaustion).

At a time when these detrimental effects of the gendered division of labor are becoming increasingly visible, the study by Ergas and York makes a key point. The conclusion to their report emphasizes the vitality of integrating women into decision-making for climate-change policy, stating:

Improving women’s status around the world may be an important part of efforts to curtail greenhouse gas emissions and prevent dramatic climate change from undermining the long-term prospects of societies.

Focusing on gender equality as integral to the framework of the environmental movement would have many benefits, including providing women with higher cultural status and aiding in the success and efficiency of crop production. The U.N. Commission on the Status of Women reports that if women farmers had the same resources as men, crop productivity would rise 20 to 30 percent, and world hunger would be reduced by a similar percentage. According to Voice of America, that would mean reducing hunger for between 100 and 150 million people. And that’s a great goal to have in mind for Earth Day, which we celebrate this Sunday.