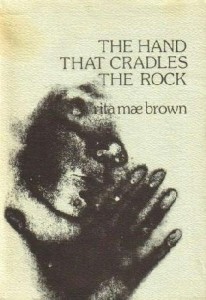 Over the past few weeks, we’ve celebrated National Poetry Month on the Ms. Blog with landmark poems from Joan Larkin, Pat Parker, Fran Winant and the anonymous authors of Because Mourning Sickness is a Staple in My Country. Now, we conclude the series with the poem “Sappho’s Reply,” from the number-one-selling book of lesbian poetry published by a feminist press in the 1970s: Rita Mae Brown’s debut collection The Hand That Cradles the Rock.

New York University Press first published The Hand that Cradles the Rock in 1971 with modest success, selling about 600 copies. In 1974, Diana Press republished the book and sold out at least two print runs, with over 4,000 copies–demonstrating the power of independent feminist presses to create hungry audiences.

When Rita Mae Brown first asked the Baltimore-based Diana Press to publish her second collection of poetry, Songs to a Handsome Woman, in 1972, the press agreed as long as Brown purchased the paper for the first, 2,000-copy print run. She did, and both Songs to a Handsome Woman and the second edition of The Hand that Cradles the Rock became bestsellers for Diana Press, boosted by the huge success of Brown’s first novel, Rubyfruit Jungle (published by the feminist press Daughters, Inc. in 1973). Rita Mae Brown’s literary achievements continued throughout the decade and to this day.

Beginning with the inversion in its title–which transforms a cliché for women as mothers into a call for a feminist revolution–The Hand the Cradles the Rock is equal parts playful and incisive, sensuous and tart, political and personal. In the poem “Sappho’s Reply,” Brown voices the Greek poet and lesbian icon Sappho as she addresses a gay and lesbian community that has “hungered in invisible chains.” With the poem’s iconic concluding line, “an army of lovers shall not fall,” Brown makes the new assertion that love, not mental illness, shapes gay and lesbian experiences.

My voice rings down through thousands of years

To coil around your body and give you strength,

You who have wept in direct sunlight,

Who have hungered in invisible chains,

Tremble to the cadence of my legacy:

An army of lovers shall not fail.

“Sappho’s Reply” from The Hand That Cradles the Rock, © 1974 by Rita Mae Brown, first published by New York University Press, reprinted by permission of The Wendy Weil Agency, Inc.

Poetry and The Furies