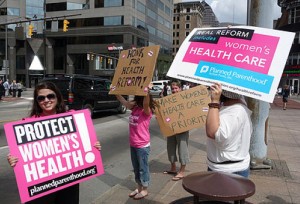 Update: The following Friday, May 3, Planned Parenthood was refunded again, after a three-judge circuit of appeals ruled that Texas must continue to fund the organization while its defunding decision is on appeal.

Yesterday, Texas Planned Parenthood clinics got a very temporary moment of reprieve in their fight to continue participating–with federal Medicaid dollars–in the Texas Women’s Health Program (WHP) when a federal judge temporarily blocked the State of Texas from excluding Planned Parenthood from WHP while their lawsuit winds its way through the courts.

Now, an overnight decision by one judge on the Fifth Circuit Court of Appeals has struck down the federal ruling, and Planned Parenthood in Texas is once again excluded from the program while their court challenge continues.

The judge who granted the State of Texas an “emergency” stay on the injunction first thing this morning is the deeply partisan, conservative Judge Jerry Smith, whom Rush Limbaugh welcomed to his anti-Obama “team” in April after Smith demanded that a Justice Department attorney write him a three-page explanation of the Obama Administration’s opinion on the court’s authority to overturn acts of Congress.

The case hinges on whether the State of Texas’ 2005 law that bars “affiliates” of abortion providers from receiving public funds is unconstitutional. Planned Parenthood has argued their exclusion from the Women’s Health Program is a violation of Planned Parenthood’s first amendment right to free speech and association.

Texas only began enforcing the 7-year-old affiliate-banning law this year–which, as RH Reality Check has reported, has suddenly left tens of thousands of low-income Texas women wondering where they will get reproductive care. Planned Parenthood previously served nearly half of the participants of the WHP in Texas. Texas has insisted it can find the money and resources within the existing state budget to cover the huge gap left by Planned Parenthood, which it says qualifies as an “affiliate” of an abortion provider, though both doctors and patients remain skeptical of those claims and recent reporting belies them.

Texas Attorney General Greg Abbott argued yesterday, in documents filed immediately after the federal ruling blocking the de-funding of Planned Parenthood, that the state would be “irreparably harmed” if it could not continue to block Planned Parenthood’s participation–despite the fact that Texas has not considered it an “emergency” to enforce the 2005 law blocking abortion “affiliates” until 2012.

Absent a stay pending appeal, the State of Texas–and the women of Texas who depend on the Women’s Health Program–will be irreparably harmed because state law prohibits Texas from continuing to operate the Texas Women’s Program if taxpayer money must be provided to entities that affiliate with abortion-promoting entities. Consequently, the district court’s preliminary injunction effectively forces Texas to choose between contravening state law and shutting down the program. The administrative provisions at issue are scheduled to go into effect (and Texas will be irreparably injured if they do not) at midnight tonight.

Given no injury has been shown over the past 7 years of Planned Parenthood’s participation, it is clear that the true emergency is that this is an election year and again we are seeing politicians put the health of their political careers ahead of the health of women.

This is the second time this year that the Fifth Circuit–and Judge Jerry Smith in particular–has ruled against a federal judge on a case involving women’s health and rights to abortion in Texas. Smith was on the openly anti-choice three-judge panel that struck down a temporary injunction against Texas’ forced transvaginal ultrasound law in January, ensuring that the law continues to be enforced while its constitutionality is under review in the courts. The Fifth Circuit also made the unusual move at that time of retaining the right to rule on all future motions in the ultrasound case–effectively quashing any hope of the law being overturned since it can never be taken out of the hands of the anti-choice three-judge panel.

Smith, who was appointed to the Fifth Circuit by Ronald Reagan in 1988, also made news in early April when he railed against “Obamacare” during court hearings, leading the National Law Journal to say that Smith’s “tantrum” had “undermined, in several important ways, the judicial authority they purported to defend.” He’s also been part of an anti-environment ruling in the wake of the Deepwater Horizon oil spill and has in the past ruled against the use of affirmative action at the University of Texas Law School. Right in step with his Fifth Circuit colleagues, Smith appears to be as brashly conservative as his passionately anti-choice bench mate, Judge Edith Jones, who has openly acknowledged that she’d like to see Roe v. Wade overturned.