United Against the War on Women - Ms. Magazine
Skip to content

“What do we do when women’s rights are under attack? Stand up, fight back!”

That was the call that rang through downtown Los Angeles last Saturday, April 28, in protest against the ever-present War On Women, which has dragged on since Congress’ introduction of the “let women die” bill in early 2011. But for more than 300 protesters in L.A., enough was enough. Women and men—young and older—gathered in Pershing Square, armed with hand-painted signs and energized by fervid support for women’s rights. Some even traveled from Riverside and the High Desert—more than 100 miles outside of L.A.—to lend their support and voices.

The Unite Against the War on Women rally, organized by the national grassroots campaign Unite Women, included a march around Pershing Square, educational tabling and speeches from various community activists. Among the guest speakers were comedians Sarah Silverman and Zach Galifianakis, and local politicians, including L.A. City Councilmember Jan Perry and Congressional candidate Jerry Tetalman, who is running against Rep. Darrell Issa—the man behind the infamous all-male birth control hearing panel.

Dinah Stevens of Planned Parenthood and and duVergne Gaines of the Feminist Majority Foundation spoke out for reproductive rights, equal pay and the end to gender rating in health insurance policies.

Just days after the Unite Against the War on Women rallies, protesters gathered in major cities Tuesday to celebrate May Day. Although women’s rights were not a main component of the May Day rallies, the protesters, who largely called for workers’ rights, echoed many of the same concerns presented on April 28: universal healthcare and job reform. As the signs bobbing around Pershing Square had proclaimed on Saturday, “There are no jobs in my uterus.” 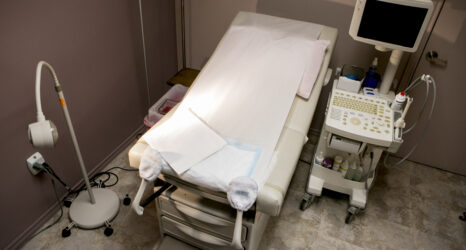 Abortion Funds Enable Access: The Time to Invest in Direct Aid Is Now

Pushed to be Betty Draper, I Was Always More Like Don
Keeping Score: VP Harris Becomes First Woman to Hold Presidential Power; Rep. Gosar Censured for Violence; 2021 Is Deadliest Year for Trans People
The Repression of Women in Afghanistan, Iran and Pakistan: A Human Rights Issue