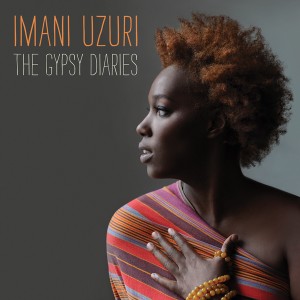 For a woman, to travel can be a feminist act. Women who set out and proclaim themselves citizens of the world tread a path that is often the prerogative of (privileged) men. Yet women who can and do take physical journeys often experience emotional transformations as well. Singer/songwriter Imani Uzuri’s latest musical release (and second solo album), The Gypsy Diaries, is a culmination of journeys outward across the globe and inward toward the self in the pursuit of wholeness.

Following the path of black traveling women such as Bessie Smith, Josephine Baker, Billie Holiday and Nina Simone, the North Carolina-born Uzuri first headed north to New York. Tracks like “I Sing the Blues” and “Meet Me at the Station” evoke connections with women who left the South with dreams of freedom on their minds and a song on their lips:

Uzuri draws from African American folk utterances–blues, spirituals and work songs–and along with Sufi devotionals, Malian hunting music and Romany laments, among other global music traditions. Along with these eclectic influences, Uzuri’s deeply soulful voice joins an acoustic guitar, a Persian daf, cello, Japanese flutes, violin and sitar to create what feminist critic Daphne Brooks refers to as “sonic cosmopolitanism.” This fusion of sound and intonation transports listeners through time and space, from the southern U.S. (“Gathering”) to Spain (“Meet Me at the Station”) to the Caribbean (“You Know Me, You Love Me”) and back home again (“She Came Traveling”).

The Gypsy Diaries is as much about “home” as it is about travel. “Ultimately, this album is about finding my place through the traveling,” says Uzuri. The journey of self-discovery often involves confronting loss and pain, as when Uzuri sings dirges about lost loved ones (“Soul Still Sings,” a stirring tribute to her grandmother) and lost love (“Lament”).

Along the way, incantations of ancestral presence and inner wisdom supply the wandering traveler with guidance. Uzuri’s cosmopolitan traveler is not disconnected from the past; she carries home with her. “Dream Child” reminds travelers who feel alone in the world to trust the guidance of their spirit:

Watch an interview with Uzuri here. Listen to some of the songs on Gypsy Diaries here.