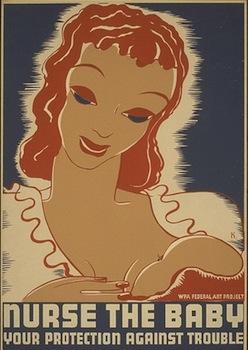 About a month ago, in anticipation of starting my son on solid foods I attended a seminar at a parenting support center in Los Angeles. Of course we must make our own baby food, the lecturer began: By chopping, steaming and pureeing (defrosting batch-cooked “food cubes” was eschewed due to potential vitamin loss) we could avoid prepackaged preservatives. And we should only buy organic. I raised my hand: Buying organic can be expensive—were certain foods better than others? Not really, she answered tersely. Actually, the best solution for our babies’ nutritional needs was to grow our own fruits and vegetables, she said. I glanced around to see if anyone else was surprised by her suggestion of urban farmsteading, but none of the other moms–all breastfeeding and baby-wearing–seemed remotely fazed. I realized I had fallen into a vortex of attachment parenting devotees.

According to TIME, the tenets of attachment parenting include extended breastfeeding, baby “wearing” and bed sharing—all continued for as long as the child demands. Badinter’s response to women who embrace this parenting model? They don’t need to worry about the cultural imposition of patriarchy, they’re already putting themselves back into the domestic sphere so solidly, so willingly and, in her view, so misguidedly, that they–or, rather, their babies–are the new administers of their oppression. Both those in the AP camp and Badinter’s followers rely heavily on the word “choice” to argue their viewpoints, but both perspectives seem to fail to recognize “choice” as the result of a constellation of social and economic realities, including the ability to access paid parental leave and childcare.

More central to these issues is the question of whether attachment parenting can be called feminist. Actor Mayim Bialik insisted to The New York Times that AP is a feminist choice–at least for her–with no mention of the economic realities necessary to enable this. And TIME‘s own website offered “How Feminism Begat Intensive Mothering,” in which Belinda Luscombe claims, “At heart, the reality of the feminist revolution was that women could do just about anything.” So, after gaining parity in the boardroom, she argues, the next natural “choice” was to bring the contemporary woman’s power, education and efficiency back into the child-rearing realm—a circular argument that rings with conservative overtones.

To fully implement AP, a woman requires the economic means to live on one income and the time to dedicate herself to full-time mothering. A more pragmatic response comes from economic reporters such as Helaine Olen, who writes,

Whatever one thinks of the pros and cons of attachment parenting … it doesn’t come cheap, especially since there aren’t many (if any) employers out there waiting for an employee who turns up with multiple children in slings and otherwise clinging to her body.

Olen likens Sears’s proposal that “‘mothers quit their jobs and borrow money’ to afford to carry out his recommendations” to Mitt Romney’s recent remarks about borrowing money from Mom and Dad.

Further, Orit Avishai takes on the incompatabilities of breastfeeding for years with management of a career:

Some mothers may have the financial means to quit their jobs and dedicate themselves to full-time parenting. For most women, this is not a viable choice, since the more time they spend away from work, the larger the negative impact on their potential lifetime earnings.

“Breastfeeding for six months or longer is only free if a mother’s time is worth absolutely nothing,” affirms an April 2012 press release from the American Sociological Association entitled “Breastfeeding Isn’t Free: Study Reveals ‘Hidden Cost’ Associated With the Practice.” Similarly, a 2009 article by Hanna Rosin in The Atlantic explored the idea that women who embrace extended breastfeeding are essentially defrauded of other gains.

Whether or not women “choose” to work is a thorny issue with Dr. Sears. As he said in a rebuttal, of sorts, to the TIME article:

Women are the greatest multi-taskers in the world.  AP, modified to the parents’ work schedule, helps busy parents reconnect with their child, which actually makes working and parenting easier.  It’s attachment moms that forged the long overdue workplace-friendly breastfeeding-pumping stations and laws which respect and value the ability of a working mother to continue part-time breastfeeding.

The logic of how AP moms fostered workplace-friendly rules while also fulfilling his edicts seems baffling–as is the vague dictum that women’s ability to multi-task serves as a solution to the increased pressures imposed on moms subscribing to AP tenets.

It is hard not to read Sears’ philosophy–one that emphasizes women either go into debt or largely give up their professional careers, hence becoming financially dependent–as anything but conservative, despite its embrace by largely well-off, liberal parents (many of whom may be unaware that both Sears and his wife Martha are evangelical Christians).  Yet I often hear AP devotees frame their parenting style as being “what our cave ancestors would do,” “earth-mother-like” or even radical.

At the six-month mark, only 36 percent of U.S. mothers are still breastfeeding, so refusing to wean is bucking a trend; score a point for AP’s radicalism. Sharing the family bed as long as children desire is also not standard U.S. practice (nor advised in the Western medical world), so score another radical point. And AP devotees are taking a non-mainstream approach that rejects what is perceived to be a paternalistic system often dismissive of women’s instincts.

But the AP philosophy can also be construed not as a radical reclaiming of a mother’s role but as a return to an essentialized view of women as duty-bound to their children in way that negates other needs and ambitions–which is precisely Badinter’s point. Rhetoric, explicit or implied, that this type of mothering is a “fulfillment” of a woman’s true purpose or highest calling, despite a claim of “choice,” rings deeply traditional. That men aren’t held to the similar expectation of being on tap to feed the crying child negates any progress toward a philosophy of equal parenting. While Sears says that men can “baby-wear” as well as women, he is more often cited as advocating that men take on support roles to their wives so that the mother can remain the central parent.

But both parents may be adding to their workload if they follow the attachment parenting model of refusing modern conveniences invented to lessen childcare drudgery, such as disposable diapers and packaged baby food. While this sort of environmentalism may come from a sincere desire to provide toxin-free childhoods and return to the valorized goodness of the homemade, Badinter suggests that “the reverence for all things natural glorifies an old concept of the maternal instinct and applauds masochism and sacrifice.” Such reverence, she writes, is also a “threat to women’s emancipation and sexual equality.”

It’s not surprising that TIME called Sears “The Man who Remade Motherhood,” adding him to the legacy of a series of men (Dr. Benjamin Spock, Dr. Richard Ferber, John Bowlby) who have dictated how women ought to care for their children. It’s also not surprising that Pickert mentions a category of mothers who suffer from what’s been called “posttraumatic Sears disorder”–that is to say, women who try to live up to the dictates of Sears’s plan but just plain can’t. Hence TIME‘s guilt-inducing headline, “Are You Mom Enough?”

Much in the same vein, a recent study documented that stay-at-home-Moms suffer from higher rates of depression. Could that be because mothering is such hard and undervalued work, exacerbated by the pressure to match up to some idealized template? The shock value of TIME‘s image may have passed, but debate will probably continue to rage between proponents of Badinter and Sears, along with calls for a middle ground, and personal choices separate from faddish dictates.

That is, of course, until the next male-based wave of mothering advice comes along.

In the meantime, I hear there are a range of on-the-shelf purees that are equally tempting to growing babies and sleep-deprived moms.