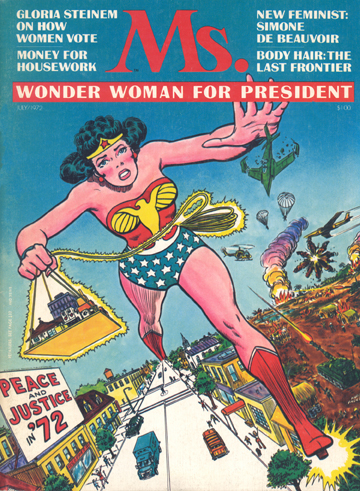 This past week, New York City Council speaker Christine Quinn and Councilwoman Gale Brewer joined several of Ms. magazine’s founding editors, along with Ms. writers and supporters, to observe the magazine’s 40th anniversary in the city of its birth. The Council issued a formal proclamation honoring the magazine’s groundbreaking reporting and activism on behalf of girls and women in the U.S. and throughout the world.

“I don’t think this could’ve happened anyplace except New York City,” said Ms. co-founder Gloria Steinem. “People have always come here to be free from other countries and sometimes from other places in this country. We have come here to be free. And it is that faith in freedom and autonomy and dignity that allowed Ms. magazine to be started here.”

A 40-page sample of Ms. was first included as an insert in New York Magazine in 1971. Less than a year later, the first regular issue appeared with the now iconic cover endorsing Wonder Woman for President.

Marston coming into her office and telling her that her husband, William Marston, had modeled Wonder Woman after his wife. Their son Pete Marston, wearing a vintage t-shirt featuring the Ms. cover, joined in the celebration. And wearing a Wonder Woman outfit was Karin Lippert, the first promotion director for Ms., who organized the event.

Co-founder Letty Cottin Pogrebin read messages from admirers who weren’t able to attend the proclamation. Sen. Kirsten Gillibrand (D-N.Y.) praised the magazine’s team for “bringing a new generation of writers and readers together to encourage more women to get off the sidelines and have their own voices heard.” Pioneering law professor and feminist activist Anita Hill also conveyed her esteem:

After 40 yrs, Ms. magazine is still smart, clear and intelligent content, relevant, on topic, speaking to women’s interests and experiences, a good read, interesting and compelling. Knowledge is power. Thank you Ms. for empowering two generations of readers.

Ms. magazine’s ability to speak across generations was evident in a cake-cutting ceremony attended by a group of Girl Scouts in the room next to the council chambers. On their way into City Hall, the founders joined a rally on the steps to protest city cuts to child care. The work continues.