The Bishops' Fortnight: Whose Religious Liberty Are We Talking About? - Ms. Magazine
Skip to content 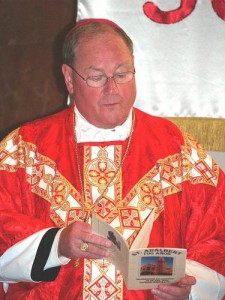 When members of the Catholic community, armed with placards declaring “Nunsense” in response to the Vatican’s investigation of American nuns, arrived at the office of the United States Conference of Catholic Bishops (USCCB) in early May, they were met with a protest larger, in a sense, than their own. The bishops had wrapped their entrance sign entirely in black plastic, leaving no inch uncovered—perhaps as a way to veil their organizational name. There’s no way, though, the bishops could find enough plastic to hide what they’ve been up to.

And there’s no hiding today, June 21, when the U.S. bishops open their “Fortnight for Freedom,” a 14-day national propaganda campaign disguised as being about “prayer, study, catechesis and public action.” Created under the pretense of defending religious freedom, the Fortnight will consist of nationwide rallies to “celebrate … great martyrs who remained faithful in the face of persecution by political power.”

“The Bishops like to hide behind religious liberty, but their agenda is very clear,” says Erin Hanna, executive director of the Women’s Ordination Conference, which works to end the exclusion of women from being priests, deacons and bishops in the Catholic Church. “They are declaring war on the right of women to be agents in their own lives.”

Yes, in the midst of its own priest sexual abuse scandal, some involving high-ranking clergy, the bishops have been most busy lately attacking nuns and relentlessly attempting to curb women’s reproductive health care. And now they’ve come up with a new name for those attacks: religious freedom.

For the last two years the bishops have acted as generals in the War on Women, leading the contraception battles from the frontlines. But after the all-male House committee hearing on birth control—which included a Catholic bishop—sparked a media maelstrom, they were forced to find a new tactic. In March, the USCCB attempted to distance itself from the notion that its opposition to the Affordable Care Act’s mandate to provide contraceptive coverage without copays in all employee health plans—including those at Catholic hospitals and universities—was because of the Church’s antiquated moral views on birth control. Rather, it has tried to reframe the issue as an infringement of religious liberty. “It’s an American issue,” the bishops stated.

But that’s not what Catholic lay people such as Hanna believe to be true. “The hierarchy is trying to preserve what little power they think they have left by attempting to extinguish the widespread call for women’s equality in the Church and society,” says Hanna. “It will not work.”

USCCB president Cardinal Timothy Dolan can whine about the Church being “strangled” by the mandate, but it doesn’t help that he and his colleagues are strangling women by trying to return them to a time when contraception was neither accessible nor acceptable and women were less valued in society. Whose religious liberty are we talking about here?

The bishops’ Fortnight for Freedom, though advertised as a time of prayer, exposes the political strategy of the bishops—one that has been slow-building yet impeccably orchestrated since the Affordable Care Act was passed in 2010. The campaign—designed to influence public opinion, the U.S. Congress and perhaps even the Supreme Court, which is about to issue its decision on the constitutionality of the Affordable Care Act—is hardly the bishops’ only effort recently to insert itself into politics. The bishops were not only instrumental in the birth control hearing but were staunchly behind recent state-level initiatives such as Measure 3 in North Dakota, which would have allowed employers who oppose contraception to deny such coverage to their employees. Similar legislation in Florida, Amendment 8, is also backed by the USCCB; in its press release for Fortnight for Freedom, the USCCB urged Catholics to “learn about” the amendment, which will appear on the November 2012 ballot.

In Iowa, the state legislature appointed in May, to much outrage, Catholic Monsignor Frank Bognanno to its Board of Medicine, despite his lack of a medical degree. As a board member, he will be able to influence legislation on women’s health and Medicaid funding for reproductive care, two hot issues currently being debated in the state. He’s already spoken out during a series of nationwide pre-Fortnight rallies organized by anti-choice extremists on June 8, dubbed Stand Up For Religious Freedom. Monsignor Bognanno laid out the bishops’ real agenda at the Des Moines rally when he said,

Some people say this is an issue that should be between a woman and her doctor. That’s not true. It’s between the woman and the doctor and the one who has to pay.

But such statements are beginning to fall on deaf ears. “The more the bishops prattle on about the so-called ‘War on Religion,'” says Hanna, “the more they are becoming completely irrelevant to the people in the pews.

“When women are full and equal partners in every aspect of the Catholic Church,” she adds, “only then will the Roman Catholic Church be associated with accountability, transparency and justice rather than hierarchy, hypocrisy, exclusion and scandal.”