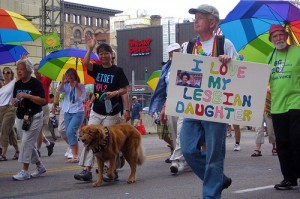 At LGBT Pride parades around the country, the queer community always puts on a show. Rainbows, glitter, big hair, fabulous costumes, leather, dykes on bikes and partial nudity—pretty much anything goes, as participants let their freak flags fly.

But the most beloved contingent of Pride marchers is seldom flamboyant. In fact, they often stand out by looking so completely ordinary, like central casting’s view of middle America. Members of PFLAG (Parents, Families, and Friends of Lesbians and Gays), carry signs that say things like, “I Love My Lesbian Daughter” and “My Pride is My Gay Child.” When they march by, people along the parade route cheer, applaud and openly weep.

The idea for PFLAG emerged from a Pride parade in June 1972 when Jeanne Manford, a New York City grade school teacher, marched alongside her gay son, Morty, holding a sign with what was then a new message: “Parents of Gays: Unite in Support for our Children.” Manford was surprised by the welcome she received that day:

As we marched the parade route, so many people came up and hugged me and cried and talked about their own parents.

The people who approached her asked if she could speak with their mothers and fathers, no doubt wishing their families could be so accepting. Manford has been called the “mother of the straight ally movement,” and PFLAG, the national organization she helped to found shortly after that emotional march, has become one of the most important and influential ally groups for gay rights in this country.

Manford’s role as a gay rights leader began one night as she was watching television in her home. On the news, she saw footage of her activist son being beaten at a protest while police looked on. She took action by writing a letter [pdf] that appeared in the New York Post on April 29, 1972, in which she declared, “I have a homosexual son and I love him.” Manford later explained, “I didn’t think anything of it, but I guess it was the first time a mother ever stood up publicly and said, ‘Yes, I have a homosexual child.'”

A few weeks later, she took up her sign and marched her way into LGBT history. 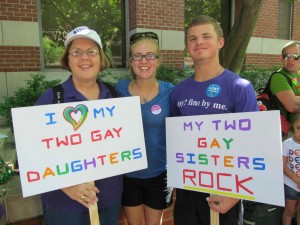 Initially conceived of as a support group for parents to help them come to terms with their offspring’s sexuality, PFLAG quickly developed into a resource for the entire queer community. It provides information and support to parents, families and friends of lesbian, gay, bisexual and transgender youth, and it has been a leading force in national efforts to fight anti-gay bullying. Its new campaign, “Cultivating Respect: Safe Schools for All,” seeks to improve school environments where, according to a recent study, “9 out of 10 LGBT students experience some form of mistreatment.” In a related initiative, “Care With Pride,” PFLAG has teamed up with Walgreen’s and Johnson and Johnson to raise funds and media awareness in an effort to combat school bullying.

Betty DeGeneres, another famous PFLAG mom, is the spokesperson for the Care With Pride campaign:

After 40 years, we would love for there to be no more need for our mission, but the reality is that we have seen an increased interest and revitalization in a range of communities. There is increased interest in PFLAG where you see bullying incidents, deaths by suicide or anti-LGBT legislation, but we also still see a need in places where people perceive there is widespread acceptance. The support that has been such a signature of PFLAG will always be a core part of our mission, but PFLAG is increasingly recognized for our efforts on education and advocacy.  The truth is that kids are coming out earlier and earlier, which is a great statement about how society is changing and how many parents are becoming more accepting and aware. Now those parents are turning to PFLAG and taking the next step: How do we get educated, educate others and advocate so that all of these kids will have better lives?

When parents and friends take a stand for the dignity and equality of LGBT youth, they are standing for children everywhere. Our youth don’t just need this—they deserve it.

A recent CNN poll found that 60 percent of Americans “say they have a close friend or family member who is gay,” up from 49 percent in 2010. For those who seek to understand their LGBT friends and family better, and for those who want to be supportive allies, PFLAG is a vital resource.

As Pride month comes to a close—recognized on the national stage for the fourth year in a row by President Obama (see his proclamations for 2012, 2011, 2010 and 2009)—let’s thank the moms and dads, grandmas and grandpas, sisters, brothers, children, in-laws and friends for their love and support. If you’d like to send a personal thank-you note to 93-year-old Jeanne Manford for being such a good mother to us all, you may send an e-mail to [email protected]. You may also send cards to:

Photo at top from Flickr user twodolla via Creative Commons 3.0. Other photos courtesy of PFLAG