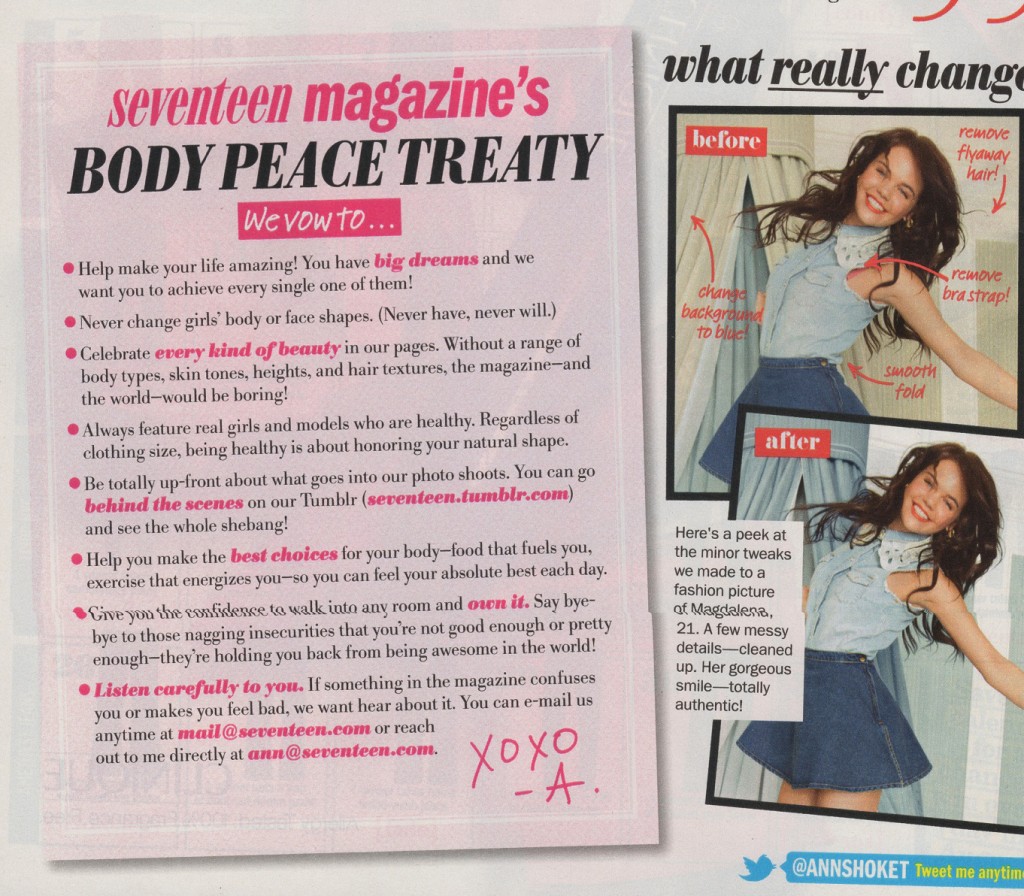 At 14 years old, Bluhm knew that teenagers with blemish-free skin, perfect hair and stick-thin physiques weren’t the norm. And she was sick of looking at the fakes. So with the help of SPARK Movement, she launched an online petition at Change.org asking Seventeen to include one unaltered, Photoshop-free spread every issue.

Bluhm wrote in the petition:

I want to see regular girls that look like me in a magazine that’s supposed to be for me. For the sake of all the struggling girls all over America, who read Seventeen and think these fake images are what they should be, I’m stepping up.

Bluhm’s petition garnered more than 84,000 signatures, and this week Seventeen got the message. In the magazine’s August issue, an eight-point “Body Peace Treaty” vowed to “celebrate every kind of beauty,” and pledged never to change girls’ body or face shapes with retouching. Seventeen editor-in-chief Ann Shoket also promised to be more transparent with the photo shoot process by posting behind-the-scenes photos on the Seventeen Tumblr.

Bluhm declared victory on the Change.org website, thanking her supporters:

Seventeen listened! They’re saying they won’t use Photoshop to digitally alter their models! This is a huge victory, and I’m so unbelievably happy.

In her petition, Bluhm had talked about the endless reel of negative body comments in her ballet class. While ballet dancers are often the target of body-image issues, she said, “It’s not just ballet dancers who feel the pressure to be ‘pretty.’ It’s everyone.”

Magazines that feature unattainable and untrue representations of young women fuel that negative commentary. It’s a constant flood that inevitably gives young women more reason to feel inadequate and insecure. With embarrassing stories and guides to the best prom dresses under $100, Seventeen is a lifestyle magazine ostensibly for regular girls–markedly different from Vogue and other high-fashion magazines. Photoshopped models aren’t ideal in any publication, but they are especially damaging in a magazine geared to young women.

Bluhm’s victory is two-fold. Without digital altering, readers can see what real girls, like them, actually look like. Seventeen’s new pledge also shows teenage girls that if they don’t like something, they have the power to change it. Although the magazine hasn’t officially given Bluhm credit for their change of mind, it’s clear she was the catalyst. She’s proven that activism and commitment to a cause–at any age–can work. And she’s already inspired another petition, targeting Teen Vogue.

Young women read Seventeen and other teen magazines for ideas and inspiration. They look up to the women featured and, consciously or not, try to emulate them. Bluhm told ABC News that it’s crucial for young women to “see a reflection of what truly represents a teenage girl nowadays.” They’re awkward, sometimes, with the youthful uncertainty of changes and hormones and growing into themselves. But they’re beautiful in the way that only real girls are–unretouched and unedited.

There has been some speculation as to the seriousness of the changes to Seventeen’s photoshop policy. Though Bluhm declared victory and proclaimed her own satisfaction with Shoket’s “Body Peace Treaty,” the hot pink bullet points may not be all they’re cracked up to be. Upon closer examination, the “new and improved” policy may not improve that much upon its former iteration. The letter overtly confirms that Seventeen will continue to retouch photos. And Shoket still claims that Seventeen “never has never will” alter its models’ bodies–a statement that contradicts the very accusation Bluhm (and her 85,000 supporters) made with her petition.

How Johnny Depp Turned Abuse Allegations Into a Comeback
Corporate Profiteering Is Driving Inflation
Biden Administration Clings to Title 42, Despite Its Harm to Asylum Seekers